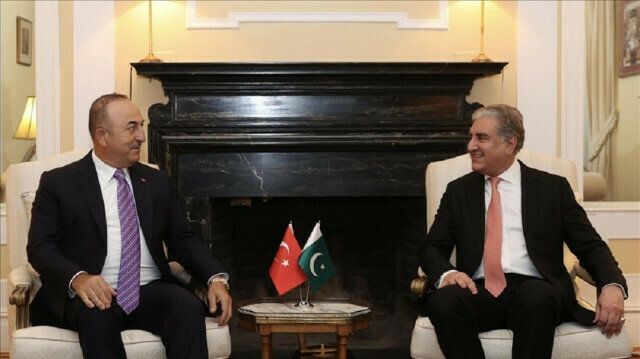 The Turkish and Pakistani foreign ministers discussed Afghanistan and bilateral relations in New York on Thursday on the sidelines of the 76th session of the UN General Assembly.
Mevlut Cavusoglu tweeted after meeting Shah Mahmood Qureshi.
"Started last day in #NYC assessing situation in Afghanistan amp; bilateral relations w/my brother FM @SMQureshiPTI of Pakistan," Cavusoglu tweeted.
"The two Foreign Ministers reviewed their close bilateral relations and discussed steps to further enhance cooperation between Pakistan and Turkey in all areas," according to a statement by Pakistan's Ministry of Foreign Affairs.
"They also exchanged views on the situation in Afghanistan as well as other regional and global issues," it added.
Qureshi thanked Cavusoglu for the support of President Recep Tayyip Erdogan, the Turkish government and the people of Turkey to Kashmiris for "their right to self-determination."
He also highlighted the need for sustained international engagement to support lasting peace and stability in Afghanistan.
"In addition to calling for the urgent provision of humanitarian assistance to the Afghan people, the Foreign Minister underscored the need for a coordinated approach to avert an economic collapse in Afghanistan," said the statement.