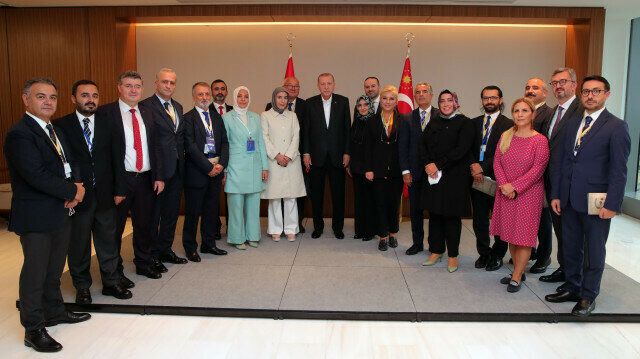 As NATO allies I hope we treat each other amicably and not with hostility, but the current state of events do not seem to be going that way, the Turkish president said on Thursday, referring to Turkey's relations with the US.
Speaking to press before his return from New York, where he went to attend the 76th UN General Assembly session, Recep Tayyip Erdogan said he had worked well with former US presidents George W. Bush, Barack Obama and Donald Trump, lamenting that relations did not start off well with Joe Biden.
Erdogan said Turkey's stance on F-35 stealth fighter jet program is honest, but the US is not being sincere. Not giving Turkey F-35s by using the S-400 issue as a pretext does not comply with diplomatic norms and inter-state relations, he added.
In 2019, Washington announced it was taking Turkey out of the F-35 stealth fighter jet program over Ankara's purchase of the Russian S-400 missile defense system.
The US claimed that the Russian S-400 would compromise security of the F-35s, but Turkey said these fears were baseless, and has repeatedly proposed setting up a commission to clarify the issue.
"Just like Trump administration, also Biden has started giving weapons, ammunition and equipment to terrorist organizations. We are not going to be a mere spectator to this," Erdogan said.
"When you look at the weapons currently in the hands of the Taliban, these weapons belong to the US. Therefore, they will have to pay the price," he added.
Referring to the interim Taliban government in Afghanistan, Erdogan said unfortunately an inclusive administration has not been formed.
On climate change, the president said Turkey will share its views in the upcoming COP26 conference in Glasgow, Scotland.