Azerbaijani diplomats discussed the new regional order in the region 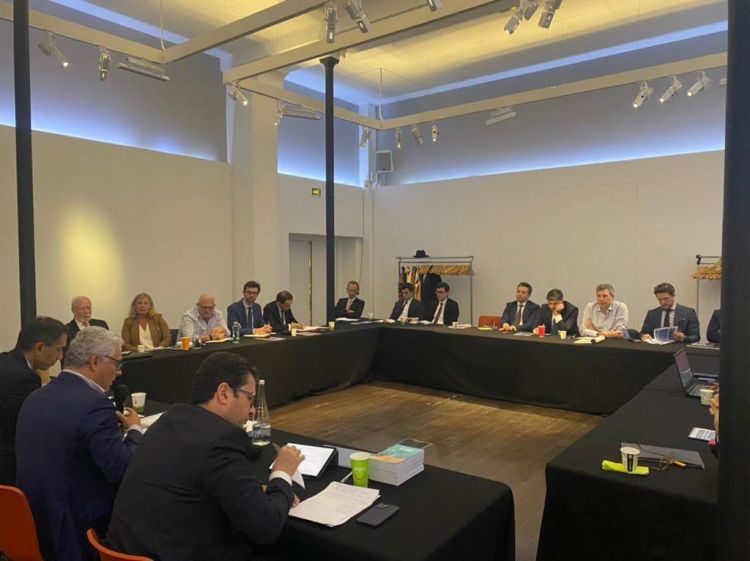 Azerbaijani diplomats and foreign analysts have discussed the new regional order in the South Caucasus after the last year's 44-day war with Armenia.

According to Azerinews, the discussions were held on September 27 at a round table in Paris under the auspices of the European Union Institute for Security Studies as part of the events timed to the first anniversary of the beginning of the Second Armenia-Azerbaijan Karabakh war.

The event was attended by Azerbaijan's ambassador to France Rahman Mustafayev, permanent representative to UNESCO Elman Abdullayev, French experts, political analysts and representatives of NGOs working in the field of international conflicts, de-mining and confidence-building measures.

Azerbaijan’s ambassador to France Rahman Mustafayev briefed the participants about the post-war situation and the regional order emerging in the South Caucasus, which can be associated with Azerbaijan’s growing importance, the strategic Russian-Turkish dialogue and cooperation, the mechanism of the trilateral declaration signed on November 10, as well as the OSCE Minsk Group.

Mustafayev described the de-mining of the liberated territories, gaining information about the 4,000 missing Azerbaijani citizens, the restoration of the liberated lands and achieving a peace treaty between Azerbaijan and Armenia as the main tasks of the post-war period.

Commenting on the OSCE Minsk Group's future role in the region, the ambassador said that the group's further activities depend on how the co-chairs will adapt to the new regional realities.

Furthermore, Elman Abdullayev spoke about Azerbaijan-UNESCO relations and stressed the importance of UNESCO experts’ visit to the liberated lands to assess the scale of destructions that Armenia had inflicted on Azerbaijan's cultural heritage over 30 years of occupation.

The participants changed views on multiple issues related to the South Caucasus and Azerbaijani-French relations.

Earlier, President Ilham Aliyev said that “Azerbaijan has created a new reality in the Southern Caucasus region which has to be taken into account by all. Armenia has to make a choice between regional cooperation and illegal and baseless territorial claims against its neighbors”.

he stressed that as the conflict is over, Azerbaijan has already announced its readiness to embark upon the border delimitation and demarcation between Azerbaijan and Armenia and to start negotiations on a peace agreement with Armenia, based on mutual recognition of sovereignty and territorial integrity of each other.

Aliyev described transportation projects as one of the areas that can serve as the cause of peace and cooperation and stressed that the Zangazur corridor will create new opportunities for the region.