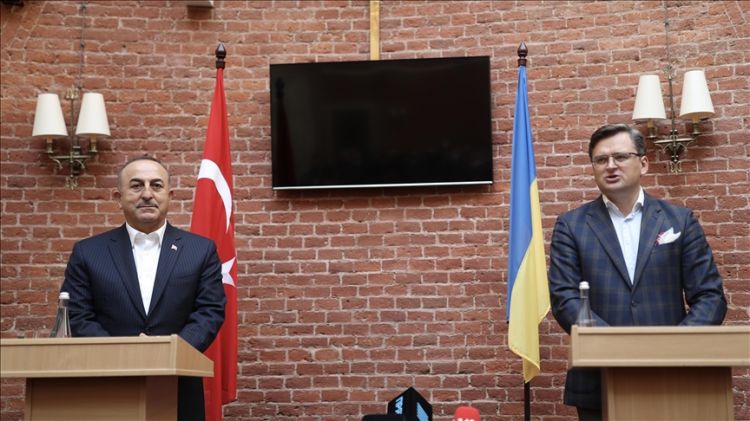 The Ukrainian foreign minister on Friday said his country's security depends on partnership with "real friends" like Turkey.
"As Ukraine is not a member of NATO, there is no security guarantee from other countries, our security depends on ourselves and now partnership with real friends like Turkey," Dmitro Kuleba told a panel at Ivan Franko National University of Lviv, along with Turkish Foreign Minister Mevlut Cavusoglu.
He said Turkey helped Ukraine in the most difficult times, and that it is suffering from Russian aggression for the last seven years.
Russia has tripled its military presence in Crimea since 2014, Kuleba said, adding that taking this into account they began the "Quadriga format" talks in 2020.
Kuleba said Ukraine started to form regional alliances with its active diplomacy and launched the Crimean Platform, a new international consultation and coordination format to “achieve the main goal – de-occupation of Crimea and its peaceful return to Ukraine.”
He said 46 foreign delegations have so far joined the platform, and they are pleased with Turkey's support.
Russian forces entered the Crimean Peninsula in February 2014 with Russian President Vladimir Putin formally dividing the region into two separate federal subjects of the Russian Federation the following month.
Turkey and the US, as well as the UN General Assembly, view the annexation as illegal.
Turkey and Ukraine enjoy close relations that gained the status of strategic partnership in 2011.
Tourism is an important area of cooperation, and to strengthen economic and humanitarian ties, passport-free travel between the two countries commenced in June 2017.