The new Prime Minister Fumio Kishida said he is seeking the public’s mandate for his policies after being elected premier by parliament only 10 days ago. 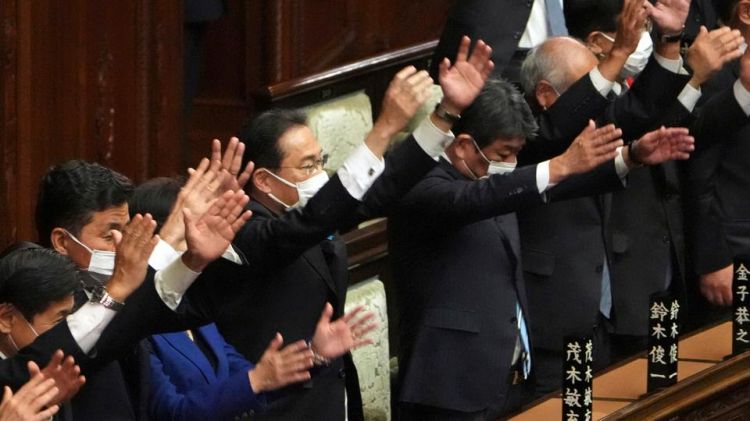 Japan’s new Prime Minister Fumio Kishida has dissolved the House of Representatives, the lower house of parliament, to set the stage for a snap election.
The new prime minister is seeking to compete against the unpopular opposition in a battle over who can better rectify the pandemic-battered economy on October 31 national elections.
"I want to use the election to tell the people what we're trying to do and what we're aiming for," Kishida told reporters gathered at his office on Thursday.
Tadamori Oshima, the speaker of the more powerful lower chamber, announced the dissolution at a plenary session while all 465 lower house lawmakers stood up, shouted “banzai” three times and left.
They've now lost their seats and official campaigning for a new lower house begins on Tuesday.
Shoring up support
Kishida enjoys reasonable public support 10 days into the job, polls show, boding well for his goal of maintaining a lower house majority for his Liberal Democratic Party (LDP) and its Komeito party coalition partner.
Voters will want to see a government with plans for decisive action to end the pandemic and rebuild the economy.
A recent Sankei newspaper poll showed that about 48 percent say they want the Kishida administration to work on coronavirus most, followed by economic recovery and employment.
Reflecting on the last 11 days, Kishida said: "I've had a very busy schedule but strangely, I'm not feeling tired – I'm feeling fulfilled."
Kishida, tasked with rallying support for the ruling party, has promised to pursue politics of “trust and empathy.”
In his first policy speech last Friday, Kishida promised to strengthen the country’s response to the coronavirus pandemic in case of another resurgence and revive its battered economy while bolstering defences against threats from China and North Korea.