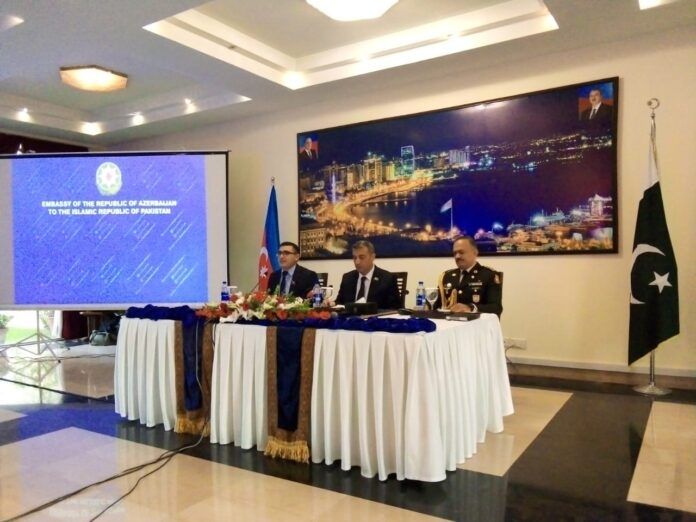 “Armenia is involved in War Crimes as it used ballistic missiles such as the Scud and Iskander-M, as well as banned white phosphorus and cluster munitions on Azerbaijani civilian population, reports DND News Agency from Islamabad”.

This was said by Ambassador of Azerbaijan in Islamabad Khazar Farhadov here on Monday while addressing a group of selective senior media persons.

He stated that Armenia also attracted mercenaries and foreign fighters from abroad and placed them against Azerbaijan during 44-Day Patriotic War.

The important points of his talks are here under:

Armenia for almost 30 years kept under occupation almost 20 percent of my country’s territory. The occupation was accompanied with notorious war crimes and crimes against humanity. Armenia committed the Khojaly genocide in February 1992, killing hundreds of civilians, including 106 women and 63 children. 1275 Azerbaijanis were taken hostage, 150 of them are still missing. Armenia’s ethnic cleansing has resulted in more than a million Azerbaijanis becoming refugees and internally displaced persons. In 1993, the UN Security Council adopted four resolutions calling for the immediate, complete and unconditional withdrawal of armed forces Armenia from the occupied territories of Azerbaijan. However, these and all other similar decisions adopted by relevant international organizations have been ignored by Armenia.

During the occupation Armenia tried to maintain the status quo. Unfortunately, no international sanctions have been imposed on Armenia to ensure the implementation of UN Security Council resolutions. The overthrow of the war criminal regime in Armenia in 2018 was not accompanied by real changes.

The Armenian government has made a number of provocative statements and actions, such as “Karabakh is Armenia and period”. The then Defense Minister of Armenia openly threatened Azerbaijan with a new war for the new territories. In addition, Armenia pursued a policy of illegal settlement of Armenians from third countries, in the occupied territories of Azerbaijan, in gross violation of international law.

In July 2020, Armenia committed a military provocation on the state border with Azerbaijan. As a result of an artillery strike in the Tovuz region of Azerbaijan, 13 servicemen and civilians were killed. In August last year, an Armenian sabotage group tried to penetrate through the former line of contact in order to commit terrorist acts against Azerbaijani military servicemen and civilians, but was successfully neutralized by us.

At the General Debates of the 75th Session of the UN General Assembly on September 24 last year, President Ilham Aliyev warned that hostile, Azerbaijanohobic statements and provocations of Armenian leadership demonstrate that Armenia was preparing for a new aggression against Azerbaijan. Three days later, on September 27 last year, Armenia launched a large-scale attack on Azerbaijani military positions and civilians.

In response, Azerbaijan launched a counterattack in its own territories against Armenia, using the right to self-defense enshrined in Article 51 of the UN Charter. For 44 days, the Armenian armed forces intensively fired on the regions and cities along and also far from the frontline. Armenia used ballistic missiles such as the Scud and Iskander-M, as well as banned white phosphorus and cluster munitions. As a result of these Armenian war crimes, more than 100 civilians, including 11 children, were killed and more than 450 were injured. More than 12,000 civilian infrastructure, including individual houses, has been destroyed or severely damaged in Azerbaijan. Armenia has attracted mercenaries and foreign fighters from abroad and placed them against Azerbaijan.

In total more than 300 cities and villages were liberated on the battlefield. Armenia had to sign an act of capitulation on 10 November 2020. Accordingly, Armenia was obliged to withdraw its troops from the remaining part of Azerbaijan’s territories, namely Aghdam, Lachin and Kalbajar regions.  Azerbaijan has implemented the above-mentioned UN Security Council resolutions. The Nagorno-Karabakh conflict was left in the past. There is no administrative territorial unit called Nagorno-Karabakh in Azerbaijan. Karabakh and East Zangazur economic zones were established by a decree of President on July 7 this year.

During the occupation, which lasted for almost 30 years, Armenia deliberately destroyed cities and villages, looted and plundered all cultural and religious monuments of Azerbaijan. Armenia has tried to erase the traces of Azerbaijanis living in these areas. The city of Aghdam was destroyed to such an extent that it was called “Hiroshima of the Caucasus”. 65 of the 67 mosques in the Armenian-occupied territories were demolished and desecrated, and the remaining mosques were used as pig and cow barns. Even cemeteries have been destroyed and desecrated. The facts of complete destruction of cities and villages, as well as cultural and religious heritage of the Azerbaijani people have been widely covered by the international media.

Armenia has committed a serious ecocide in the occupied territories of Azerbaijan. 60,000 hectares of our forests have been destroyed, cut down and transported, and lands and rivers have been polluted.

Armenia has seriously polluted the transboundary river Oxchuchay, causing the degradation of the ecosystem of the riverine territory of Azerbaijan. Unfortunately, some foreign companies are also involved in this environmental crime. They must be held accountable for the illegal exploitation of our natural resources in our previously occupied lands.

We have about 4,000 citizens registered as missing during the First Karabakh War. Armenia must inform us about their fate. We have solid evidence that almost all of them were tortured to death by Armenian servicemen in violation of international humanitarian law and buried in mass graves.

And I would like also to emphasize in particular that we are grateful for the resolute position of brother Pakistan on the issues of Azerbaijan’s territorial integrity before and during the Patriotic War.

During the Patriotic War government, Parliament and people of Pakistan morally and politically supported us condemning Armenian aggression and supporting Azerbaijan’s just position to restore its territorial integrity.

This is a true demonstration of brotherhood. Azerbaijan supports the settlement of the Kashmir issue in accordance with the relevant UN Security Council resolutions.