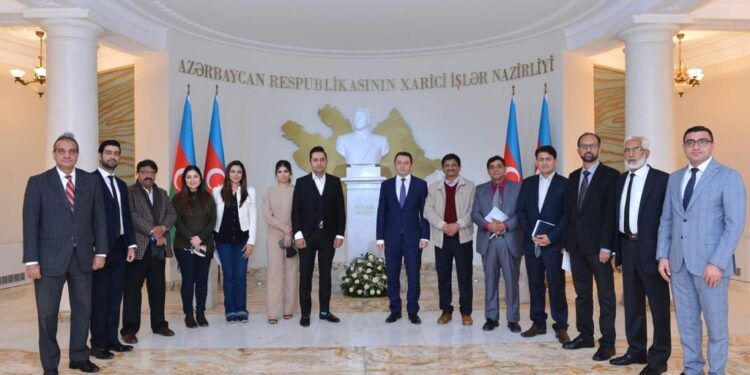 A delegation of the Pakistani media arrived in Azerbaijan’s capital Baku to visit newly liberated areas of Karabakh, Asia Plus reports.

On Thursday the delegation met with Deputy Foreign Minister of Azerbaijan Elnur Mammadov at the foreign ministry, who welcomed them upon their arrival.

The Deputy Foreign Minister while briefing the visiting Pakistani journalists, thanked Pakistan for their support to his country during Nagorno Karabakh conflict and last year patriotic war with Armenia.

“I am thankful to the government and people of Pakistan for their support to Azerbaijan during the conflict and war with Armenia,” Elnur Mammadov said.

He added that Armenia committed war crimes against innocent people of Azerbaijan and had destroyed the whole infrastructure of those areas that remained under their occupation for 30 years.

“We have filed a case in the International Court of Justice against Armenia for racial discrimination to make Armenia accountable for their war crimes,” he said.

He was referring the Azerbaijan suit Against Armenia that file in ICJ and accused Armenia of violating the International Convention on the Elimination of All Forms of Racial Discrimination, to which both states are signatories.

Last month, the first hearing was held where Azerbaijan team was leading by Elnur Mammadov.

Azerbaijan also requested the court to adjudicate interim measures to put an immediate end to Armenia’s violations as Armenia breached the international convention on the prevention of racial discrimination.

“We have been pleased to host today a group of distinguished journalists from brotherly #Pakistan to talk about massive rebuild and restoration works in the liberated #Garabakh and #Zangezur of #Azerbaijan on the eve of the first-year anniversary of the end of the #Patriotic War,” Elnur Mammadov later tweeted.

The delegation will visit to different newly liberated areas where the authorities will brief them over the reconstruction efforts and war crimes committed by Armenian forces in territories remained under their occupation for 30 years.