Azerbaijan is determined to turn the page of long-term confrontation with Armenia - Ilham Aliyev - ednews.net 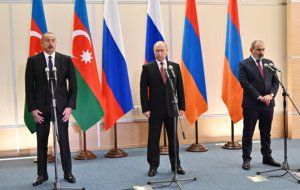 'Today a detailed, I would say, sincere conversation took place... We openly discussed our plans, openly discussed issues of concern to both sides. And the main thing is that the decisions that we have made in the settlement of disputes and disagreements, I think, will contribute to the situation in the South Caucasus being safer and more predictable,' said Ilham Aliyev.

Azerbaijan is determined to turn the page of a long-term confrontation with Armenia and begin a stage of normal interaction, said the head of state.

'I have repeatedly said that we in Azerbaijan are determined to turn the page of the long-term confrontation with Armenia, to begin the stage of normal interaction. I think that in this [trilateral] format we are achieving our goals,' said the Azerbaijani leader.

'Azerbaijan has always consistently advocated the observance of all humanitarian norms, whether during hostilities or after. I must say that after the end of hostilities, more than 100 detained Armenian servicemen were handed over to the Armenian side,' said Ilham Aliyev.

'I think that the outcome of our meeting will be good results, which will not be long in coming, and the situation in the region will be safer and more predictable,' said the head of the Azerbaijani state.