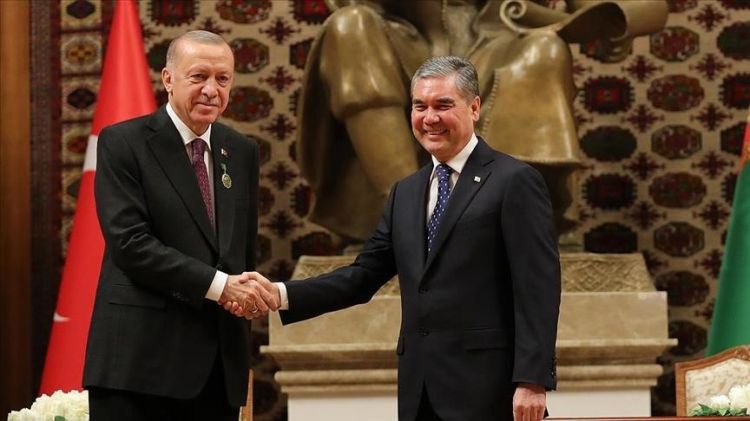 The presidents of Turkey and Turkmenistan issued a joint declaration on Saturday following bilateral talks in the Turkmen capital Ashgabat.
The two countries intend to continue developing and strengthening strategic cooperation in all fields, Turkish President Recep Tayyip Erdogan and his Turkmen counterpart Gurbanguly Berdimuhammadow said in the declaration, according to a statement from Turkey's Communications Directorate.
During their meeting at the Oguzhan Mansion, Erdogan and Berdimuhammadow discussed a wide range of issues related to bilateral cooperation and important international issues of common interest in a friendly atmosphere with mutual understanding, said the statement.
Underlining that they had similar perspectives on major international issues and that they would enhance cooperation, the two leaders expressed their agreement on furthering bilateral cooperation, including in the global platforms.
They also expressed their satisfaction with the success of the 8th Summit of the Organization of Turkic States, held in Istanbul on Nov. 12, which Turkmenistan attended as an observer, adding that they had agreed to further develop multilateral cooperation within the body, formerly known as the Turkic Council.
Erdogan and Berdimuhammadow declared that cooperation would serve the long-term interests of the two countries, as well as global and regional peace, stability, and security.
Economic cooperation
The two leaders reaffirmed the importance of boosting the bilateral trade volume between Turkey and Turkmenistan with the trade of high value-added products.
They said the functionality of the Intergovernmental Turkish-Turkmen Commission on Economic Cooperation, a coordination mechanism for the development of primarily trade-economic ties and transportation-communication relations, should also be further strengthened.