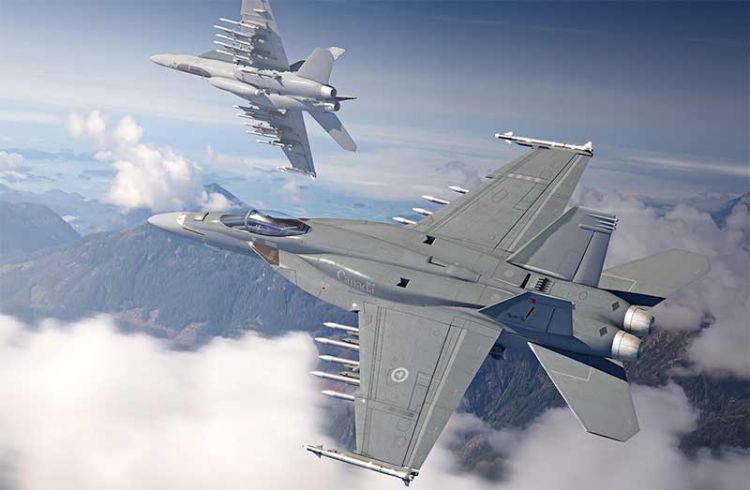 Canada has given up on the acquisition of the Boeing F / A-18 Super Hornet, according to an official statement from the government in Ottawa.

“Today, the Government of Canada announced that the following evaluation of the proposals submitted, two bidders remain eligible under the Future Fighter Capability Project competitive procurement process,” the statement from Public Services and Procurement Canada reads. Thus, the last two participants in the race for next-generation fighters – Saab Gripen JAS-39 E and Lockheed Martin F-35A Lightning II – remained on the final right.
Canada needs to replace its existing CF-18 Hornet air fleet. The decision to abandon the F / A-18 Super Hornet is quite surprising given the repeated requests for what Canadian society would receive if a Boeing product was chosen.
There is no clear reason why Ottawa refused to acquire the Super Hornets. Boeing has tried in recent years to give a clear perspective on the benefits of Canadian society. The company was expected to create hundreds of thousands of jobs in Canada and invest billions of US dollars in the Canadian economy. Separately, Boeing compared the price of an hour’s flight between their fighter jet and that of Lockheed Martin’s competitors. According to Boeing, the value of the Super Hornet is approximately $ 18,000 for fiscal 2020, compared to $ 33,600 for the F-35A.
What’s more, the Chicago-based company has assured the Canadian government that it can even retain part of its CF-18 Hornet air fleet, helping to integrate new software and weapons systems. Boeing has repeatedly stressed that the Super Hornets are suitable for foreign missions of the Canadian ramie, as well as for the air police.
Against the background of the events of the last day, the United States believes that the final winner in the last lap “with only two horses” will be the F-35A. One reason is that Canada is part of the F-35A external financing program, which has so far invested approximately $ 613 million.
Gripen is an outsider in the race, experts say, but leave the door open for possible surprises. We remind you that the Swedes have already secured offset production in Brazil, opening a new plant and thousands of jobs. Although not stealthy, the Gripen JAS 39E is Sweden’s answer to next-generation fighter jets – lower maintenance and flight hours, much easier maintenance, extremely powerful radar, and the latest technology in beyond-visual range weaponry.
In the coming weeks, it will become clear which of the two fighters will win in Canada. However, political scientists have suggested that there could be serious political upheavals in the ruling cabinet if it wins the American stealth fighter Lockheed. BulgarianMilitary.com reminds you that the F-35.
In 2010, the Conservative Party of Canada government announced plans to purchase 65 F-35As. However, when the Liberal Party of Canada won the 2015 election, new Prime Minister Justin Trudeau promised to cancel the deal and renew the treaty. As this new race continued, problems arose that raised questions about the future chances of Joint Strike Fighter in Canada.
However, with everything that has happened in the process so far, the possibility of more surprises should not be ruled out.