The White House has said it would not send any government officials to the games due to “ongoing genocide and crimes against humanity in Xinjiang and other human rights abuses.” 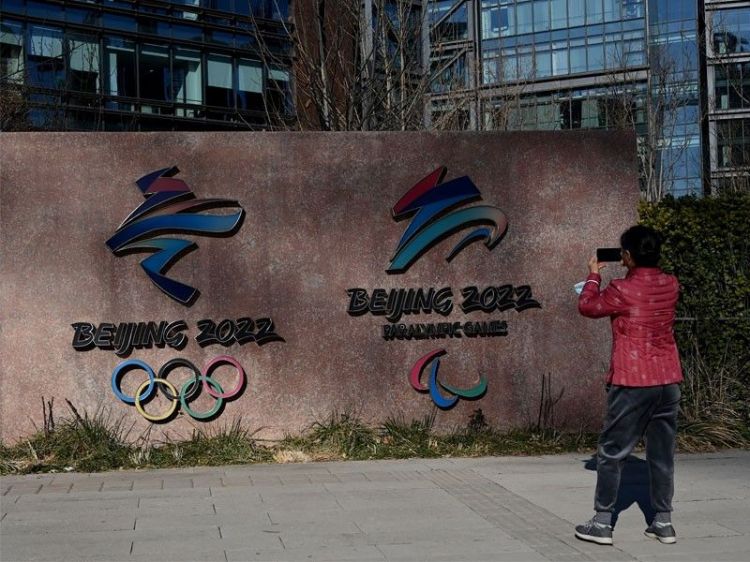 China has told the United States it will "pay" for its diplomatic boycott of the Beijing Winter Olympics on human rights grounds.
The White House on Monday announced it would not send any government officials to the games in February 2022, due to "ongoing genocide and crimes against humanity in Xinjiang and other human rights abuses."
This prompted a stern response from Chinese Foreign Ministry spokesperson Zhao Lijian, who told a press conference Tuesday: "The U.S. will pay for its wrongdoing. You can wait and see."
Zhao accused the U.S. of hypocrisy and called Western allegations of a cultural genocide of Uyghur Muslims was a "fabricated" lie.
"The U.S. side attempts to disrupt the Beijing Winter Olympics," he said.
According to human rights groups and first-hand accounts, China has held 1 million Uyghurs and other minorities in internment camps where some are subjected to forced labor, sterilization and torture. China denies this and says the “re-education camps” are necessary to fight terrorism.
China is also accused by the U.S. and other western powers of removing Hong Kong's democratic freedoms and is facing questions over tennis player Peng Shuai, who has not been seen in public for weeks after making allegations of sexual assault against a former senior Chinese Communist Party official.
Zhao added that the American move to politicize the event was "contrary to the Olympic Charter Principle that sports should maintain political neutrality."
He also warned the U.S. that its position could "harm the dialogue and cooperation in a series of important areas and our international regional issues."
American athletes will still participate in the games. President Joe Biden has been facing bipartisan pressure from lawmakers to take a stronger line on China, including calls for the U.S. to argue the games should be moved.
Hu Xijin, editor-in-chief of the Chinese state-affiliated Global Times newspaper, said it was "super narcissistic" to believe the boycott was a powerful move, adding that many U.S. officials wouldn't be allowed in due to Covid-19 protocols.
U.S. Secretary of State Antony Blinken has previously said that allies were consulted on a "shared approach" to a boycott, but other countries have proved more cautious in mixing politics and sports.
The office of Italian Prime Minister Mario Draghi told NBC News Italy would not boycott the games.
Canada’s foreign ministry said Monday it "remains deeply disturbed by the troubling reports of human rights violations in China" and continues to discuss the matter with partners and allies.
New Zealand will not send government ministers to the games, although its decision was made in October.
"We’ve already made the decision that we weren’t attending and we will continue to raise the issues of human rights which I note is what the U.S. are raising," Grant Robertson, New Zealand's deputy prime minister, told a press conference Tuesday.
John Hoberman, a professor at the University of Texas at Austin, who has been researching Olympics ethics since his 1986 book “The Olympic Crisis: Sport, Politics, and the Moral Order,” was critical of the U.S. boycott for not going far enough.
"I think that this is less than a half measure, because people don’t tune into the Olympics to watch diplomats," he told NBC News by phone. "If you keep your diplomats out, you are you are delivering a certain kind of soft blow to the Chinese regime."