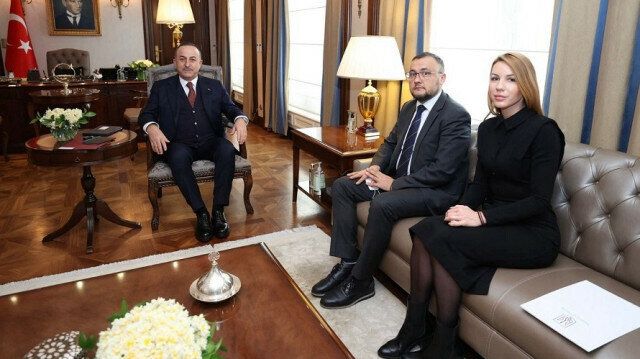 Turkiye's Foreign Minister Mevlut Cavusoglu on Thursday met the Ukrainian ambassador to Ankara in the wake of the Russia-Ukraine war which has entered its eighth day.
Mevlut Cavusoglu on Twitter said that he hosted Vasyl Bodnar and his wife at the ministry and expressed that Turkey fully supports Ukraine's political unity, sovereignty and territorial integrity.
He also thanked the ambassador for his country's assistance in evacuating Turkish citizens from Ukraine.
Russia's war on Ukraine, which began on Feb. 24, has been met with international outrage, with the European Union, US and UK, among others, implementing tough financial sanctions on Moscow.
More than a million people have fled Ukraine to neighboring countries, according to the UN Refugee Agency.