Hong Kong Chief Executive Carrie Lam says her decision not to pursue a second term is "entirely based" on her family considerations. 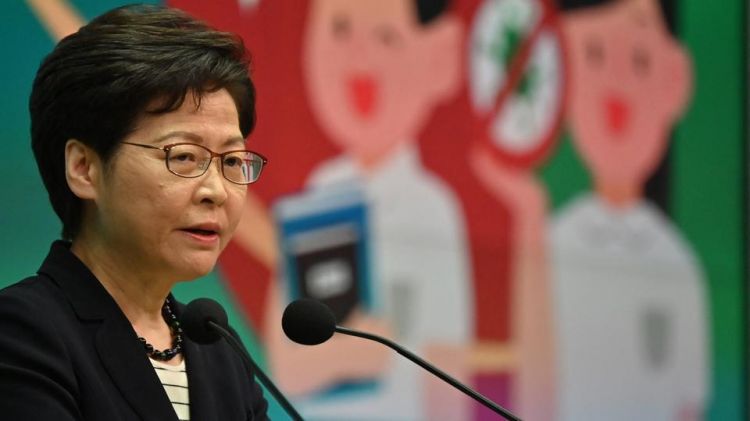 Hong Kong's leader Carrie Lam has announced that she will step down in June, ending a divisive term that saw anti-Beijing protests squashed and strict pandemic curbs plunge the business hub into international isolation.
Ending months of speculation, Lam confirmed she would not seek a second term when a committee made up of the city's political elite chooses a new leader next month.
"I will complete my five-year term as chief executive on June 30, and officially conclude my 42-year career in government," Lam told reporters on Monday.
Lam said China's leaders "understood and respected" her choice not to seek another term and that she wanted to spend more time with her family.
She said her decision is "entirely based" her family considerations. Lam is married with two sons.
A career bureaucrat, Lam became Hong Kong's first woman leader in 2017.
The 64-year-old had dodged questions for months over whether she would run again and during Monday's announcement she revealed that had informed Beijing of her plans to quit more than a year ago.
Hong Kongers and businesses based in the finance hub currently have little clarity on who will be the next leader.
The chief executive position is not popularly elected, one of the core demands of years of democracy protests which have since been crushed.
Instead, the position is selected by a 1,500-strong pro-Beijing committee, the equivalent of 0.02 percent of the city's 7.4 million population.
The city's next chief executive will be chosen on May 8 but so far no one with a realistic prospect has publicly thrown their hat into the ring.
Politics and pandemic
Hong Kong's number two official, John Lee, who has a background in the security services, has been tipped by local press as the most likely contender.
Another potential front runner is finance chief Paul Chan.
Lam said that she has not yet received any resignations from her ministers, a step that Lee and Chan would need to make before running.
Lam's successor will take office on July 1, the 25th anniversary of Hong Kong's handover by Britain to China.
Her administration also hewed to China's zero-Covid model, implementing some of the world's toughest anti-coronavirus measures and exasperating international businesses.
The largely closed borders and strict quarantine rules kept infections at bay for some 18 months at the expense of Hong Kong being cut off internationally.
But the zero-Covid strategy collapsed when the highly transmissible Omicron variant broke through earlier this year leaving Hong Kong with one of the developed world's highest fatality rates.