Russia afraid to admit its policy towards Ukraine is erroneous - says Zelenksyy - ednews.net

"Both Lukashenko and Putin's threats are no more than desperate attempts of bluffing" - Ukrainian expert
Read: 222

‘They ruined the lives of millions of people -- and we are allegedly to blame,’ says Ukraine's president 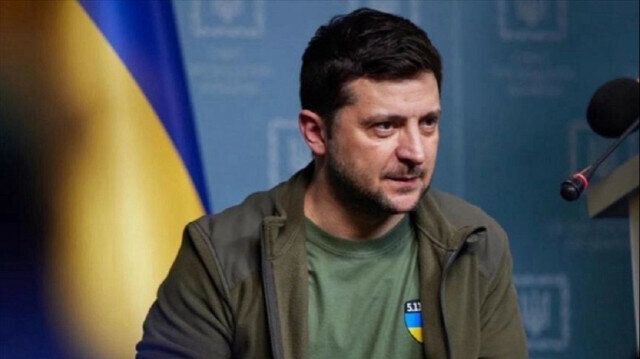 Russia is afraid to admit that its decades-old policy towards Ukraine is wrong, Ukraine's president said Sunday.
“They are afraid to admit that Russia's entire policy toward Ukraine has been erroneous for decades and has only ruined everything Russia had in its relations with Ukraine since previous times,” said Volodymyr Zelenskyy in a video address.
Pointing out that Moscow is trying to blame Kyiv for its own aggression, Zelenskyy recalled that Crimea was illegally annexed by Russia.
Zelenskyy also said that Russia destroyed normal life in Donbas.
“They have been killing people and children on our land for eight years -- and we are allegedly to blame. They destroyed the most powerful industrial region in Eastern Europe -- and we are allegedly to blame. They ruined the lives of millions of people -- and we are allegedly to blame. They started a full- scale war against us -- and we are allegedly to blame,” he said.
“It all came from cowardice. When cowardice grows, it turns into a catastrophe. When people lack the courage to admit their mistakes, apologize, adapt to reality, learn, they turn into monsters. And when the world ignores it, the monsters decide that it is the world that has to adapt to them. Ukraine will stop all this.”
Russia's war on Ukraine, which began on Feb. 24, has been met with international outrage, with the European Union, US and the UK, among others, implementing stringent economic penalties on Moscow.
At least 1,793 civilians have been killed in Ukraine and 2,439 injured, according to estimates by the UN, which noted that the true figure is likely far higher.
More than 4.5 million Ukrainians have also fled to several European countries, with millions more displaced inside the country, according to the UN refugee agency.