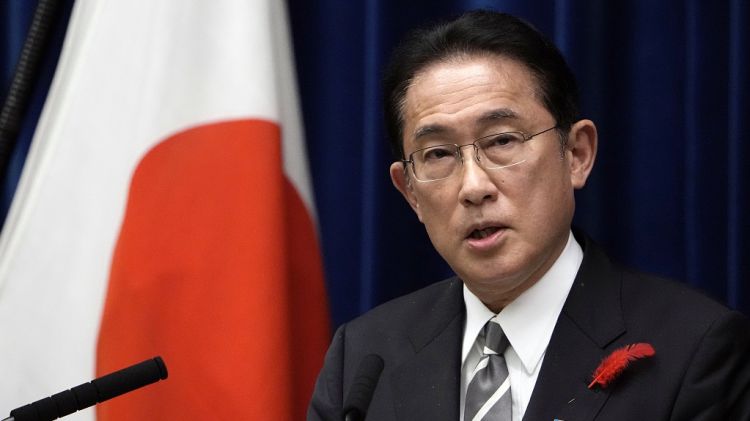 Japanese Prime Minister Fumio Kishida on Thursday sent a ritual offering to the notorious Yasukuni Shrine on the occasion of its spring festival.
The Japanese leader will not, however, visit the controversial shrine in person during the festival, taking the same approach when he also offered a "masakaki" shortly after the liberal-leaning politician becoming prime minister last October.
The offering includes elements of the Sakaki tree that is placed on both sides of an altar at Shinto rituals.
Former Prime Minister Shinzo Abe, a known right-wing conservative, visited the contentious Yasukuni Shrine in person on Thursday. His previous visit in 2013 while in office caused an uproar from Japan's closest neighbors as well as staunch condemnation from the United States at the time.
Abe paid a visit in person last year after relinquishing his position as prime minister in 2020.
Other in-person visits Thursday to the shrine were made by known conservative hardliner Sanae Takaichi, policy chief of Kishida's ruling Liberal Democratic Party (LDP).
Yasukuni Shrine, seen by neighboring countries as a symbol of Japan's past brutal militarism, has long-been a source of diplomatic friction with Japan's neighbors as it honors convicted war criminals together with the war dead.
Yasukuni Shrine honors 14 Class-A convicted war criminals among 2.5 million Japanese war dead from World War II and along with its historically inaccurate museum is a testament to Japan's past wartime crimes and wrongdoings.
Visits and ritual offerings made in person or by proxy to the infamous shrine by Japanese leaders, officials and lawmakers have consistently sparked strong criticism and hurt the feelings of countries including China and South Korea and other countries brutalized by Japan during WWII.
Kishida's ritual offering to the war-linked shrine comes at at time when he is seeking to improve ties with South Korea under President-elect Yoon Suk-yeol, who is sending a delegation to Japan from Sunday for talks with lawmakers, diplomats and business leaders here ahead of his inauguration in May.
Relations between Tokyo and Seoul have sunk to their worst level in decades over issues regarding the Japanese army's forcible coercion into sexual slavery at Japanese military brothels during World War II and Japan's use of Korean nationals as wartime laborers.
The landmark Kono Statement, which refers to a statement released by then Chief Cabinet Secretary Yohei Kono in 1993, which served as an official admission and apology from Japan for its use of wartime sex slaves at its military brothels, has vociferously been called to be updated and adhered to by administrations since then, but has over the years been neglected by right-leaning LDP administrations.
This year also marks the 50th anniversary of the normalization of bilateral ties between Japan and China, with Japan still not consistently and squarely facing the wartime atrocities it caused as well as denying that Diaoyu Islands and adjacent islets in the East China Sea are inherently Chinese territory, causing the territorial dispute to ensue and rumble on.
As the Yasukuni issue continues to ensure that Japan's ties with its neighbors remain uneasy, observers are dumbfounded as to why politicians here do not pay their respects to Japan's war dead at the nationally and internationally recognized Chidorigafuchi National Cemetery, which was established by the government in 1959 to house the remains of Japanese soldiers who died during WWII and is located just minutes from Yasukuni in central Tokyo.
Visiting dignitaries from overseas including prime ministers and presidents who wish to pay their respects to the lives lost during the war visit the Chidorigafuchi National Cemetery as this is internationally accepted resting place of the souls lost.
Countries victimized by Japan's wartime atrocities have consistently called on the government here to square up to, rather than whitewash its wartime history and show more sincerity in admitting its wrongdoings, so that bilateral relations can be improved.