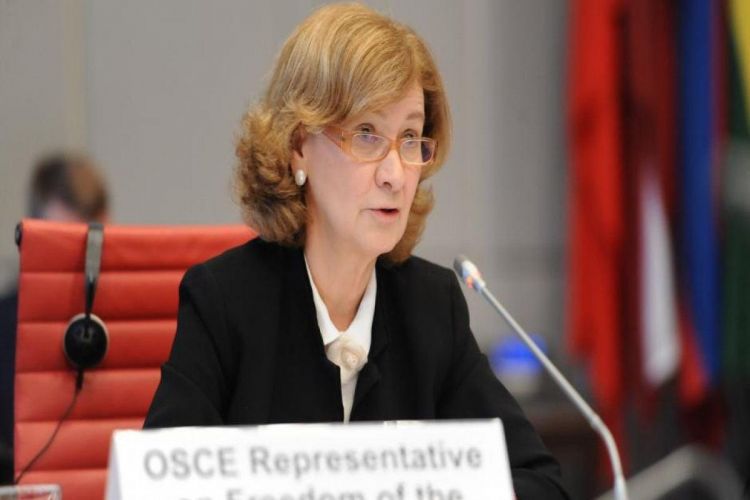 OSCE Representative on Freedom of the Media Teresa Ribeiro has asserted readiness to support Azerbaijan and make recommendations on media development, Azerinews reports.

She made the remarks at a round table on “Rise of disinformation: Impact on the media and effective response strategies” in Baku.

"The purpose of our visit to Azerbaijan is to ensure media freedom and help fight disinformation. My office is always ready to support Azerbaijan and provide recommendations on media development," Ribeiro said.

Furthermore, she stressed that it’s necessary to ensure transparency and trust toward media in the fight against disinformation in Azerbaijan,

According to the OSCE representative, freedom of speech, opinion, integrity and security of journalists should be provided.

Azerbaijan joined the CSCE (named OSCE since January 1, 1995) on January 30, 1992. This was the first European organization for Azerbaijan to join.

Since February 1992, the Armenian-Azerbaijani conflict has become the focus of OSCE in line with the principles of this organization.

As OSCE Minsk Group co-chairing countries Russia, the U.S. and France had been mediating a peaceful solution to the Armenian-Azerbaijani conflict since the signing of the volatile cease-fire agreement in 1994. The Minsk Group’s efforts resulted in no progress as Armenia refused to abide by the UN Security Council resolutions (822, 853, 874 and 884) demanding the immediate and unconditional withdrawal of its troops from Azerbaijani territories, which was the main obstacle to the resolution of the conflict.

The trilateral ceasefire deal signed by the Azerbaijani, Russian and Armenian leaders on November 10, 2020, ended the three-decade conflict over Azerbaijan’s Nagorno-Karabakh region which along with the seven adjacent regions came under the occupation of Armenian armed forces in the war in the early 1990s.