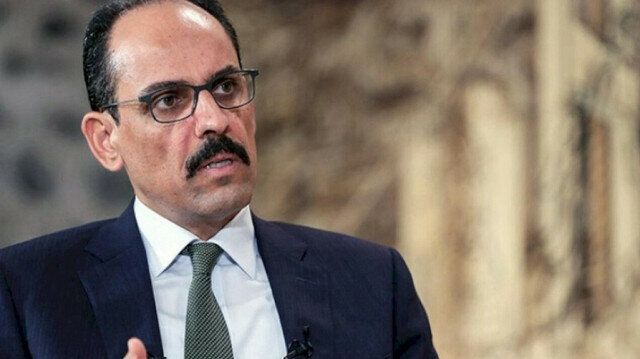 Allowing terrorists to exist in NATO countries is unacceptable, Ibrahim Kalin tells German, Swedish, Finnish, British, US interlocutors
The spokesman of Turkish President Recep Tayyip Erdogan held a series of phone calls on Wednesday with his German, Swedish, Finnish, British, and US counterparts, discussing his country's position over Sweden and Finland's NATO bid and other regional issues.
According to a statement by his office, Ibrahim Kalin held phone calls with the German chancellor's foreign policy aide Jens Plotner, Swedish Foreign Ministry State Secretary Robert Rydberg, the Finnish president's chief advisor Petri Hakkarainen, British National Security Advisor Stephen Lovegrove, and White House National Security Advisor Jake Sullivan.
Turkey, a longstanding NATO member, has voiced objections to Finland and Sweden's membership bids, criticizing the two Nordic countries for tolerating and even supporting terror groups like the YPG/PKK.
Kalin told the other officials that Turkey expects concrete steps to resolve its national security concerns on the issue of Sweden and Finland's NATO membership applications.
He added that no progress could be made on the issue if these expectations are not met, said the statement.
For any new member to join NATO, all the alliance's members must agree unanimously, including Turkey.
Over the last five years, both Sweden and Finland have failed to agree to Ankara's requests for the extradition of dozens of terrorists, including members of the PKK and Fetullah Terrorist Organization (FETO), the group behind the 2016 defeated coup in Turkey.
It would be unacceptable to allow members of terrorist organizations, such as PKK/YPG and FETO, to exist in NATO member countries, Kalin stressed in the phone calls.
He also repeated Turkey's expectations for the lifting of "unfair restrictions" in the field of defense, the statement added.
Other regional issues, including the Russia-Ukraine war, negotiation process between the two sides, and food security was also discussed, it added.
Last Friday, President Erdogan said that certain Scandinavian countries act like "guesthouses" for terrorist groups.
In its more than 35-year terror campaign against Turkey, the PKK -- listed as a terrorist organization by Turkey, the US, and the EU -- has been responsible for the deaths of over 40,000 people. The YPG is the PKK's Syrian offshoot.
FETO and its US-based leader Fetullah Gulen orchestrated the defeated coup of July 15, 2016 in Turkey, in which 251 people were killed and 2,734 injured.
Senior representatives of Sweden and Finland are set to visit Turkey in the coming days to hold official talks in Ankara to discuss their NATO membership bids, spurred by Russia's war on Ukraine.