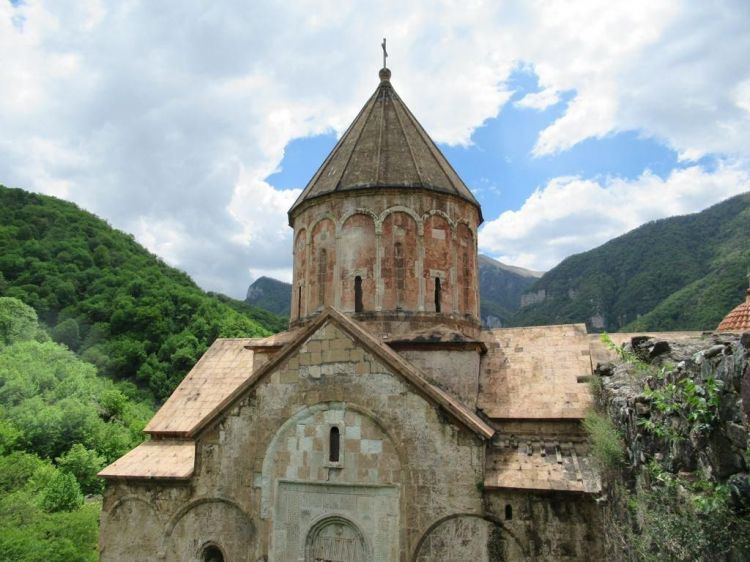 The Russian peacekeepers are hindering Azerbaijan’s access to the Khudavang monastery by letting Armenian religious leaders engage there, Azernews reports.

According to Armenian sources, Armenian pilgrims once again got the opportunity to visit the monastery located on Azerbaijan’s territory. It was noted that Armenians worked intensively with the Russian peacekeepers so that the Armenian pilgrims could make the pilgrimage to Khudavang without any obstacles.

“Under the reached agreement, no more than 20-22 pilgrims will be able to visit Khudavang by bus once a month, and under strict control – access to the territory of the monastery complex will be allowed only after a personal inspection of each of the pilgrims,” an Armenian clergyman said.

At the same time, it was noted that the clergy of the Russian Orthodox Church cannot serve in the monastery without the permission of the Armenian Apostolic Church.

It should be reminded that the Khudavang monastery complex in Kalbajar region’s Vang village is one of the largest and most beautiful architectural monuments of the ancient Azerbaijani state of Caucasian Albania. However, after the region’s occupation by Armenia in 1992, the complex began to be presented to the world as an Armenian monument.

For a country with its claims on a historic monument, one would think they would appreciate and take care of it. However, the reality of the Armenian occupation is quite the opposite. After the liberation of the Kalbajar region, the horrendous aftermath of the long occupation could be seen. The monastery complex was looted, and the crosses, bells, and other elements belonging to the complex were transported to Armenia.

Such actions of the Armenian forces are a gross violation of the UNESCO 1970 Convention on the illicit export of cultural property.

Built in the 9-13th century by the wife of the Albanian prince Vakhtang in Azerbaijan’s Kalbajar region, this complex is composed of the Church of Arzu Khatun, Church of Hasan, basilica, and 2 chapels.

By allowing the Armenian side to Azerbaijan's land, the Russian peacekeepers, deployed in the region, are acting against their mandate.

Specially-built monuments which were discovered by the Armenians in 2007 during the excavations they carried out on the monastery’s territory, testify to the fact that a temple was also here back in the pre-Christian period. The Armenians themselves admitted that such monuments are not typical for Armenian Christianity.

About 2,000 Russian peacekeepers have been deployed for five years in Karabakh under the trilateral cease-fire deal signed by Baku, Moscow, and Yerevan on November 10, 2020. The signed agreement obliged Armenia to withdraw all its troops from the Azerbaijani lands that it had occupied since the early 1990s.