Secretary General met with Chairman of the Senate of the Parliament of Kazakhstan - ednews.net 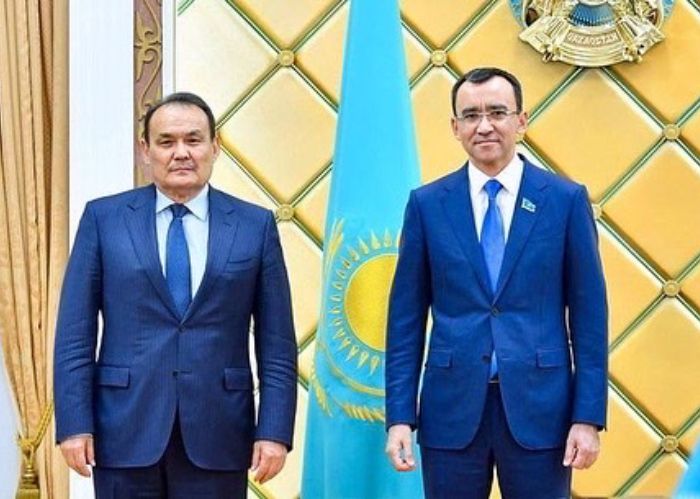 The OTS Secretary General Bagdad Amreyev met with the Chairman of the Senate of the Parliament of Kazakhstan Н.Е. Maulen Ashimbayev within the framework of his official visit to Nur-Sultan on 17 June 2022.
Secretary General B.Amreyev  expressed his gratitude to Chairman Ashimbayev for his warm reception in the Highest Chamber of the Kazakh Parliament and highlighted the strong support of Kazakhstan to the activities of the Organization of Turkic States and the multifaceted cooperation within the Organization.
Chairman Ashimbayev stated that Kazakhstan attaches great importance to further strengthening all-round mutually beneficial cooperation among the fraternal Turkic countries and reiterated the readiness of the Senate of Parliament to actively work on the implementation of the initiatives put forward by Heads of State during the OTS summits together with fellow parliamentarians from other Turkic states.
The Secretary General briefed the Chairman on the current undertakings within the OTS and the further development of strategic cooperation among the Member and Observer States of the Organization in various fields in line with decisions of historical Istanbul Summit of Heads of Turkic States.
The Chairman of Senate shared with Secretary General the latest political and social transformations in line with the resent Republican Referendum held in Kazakhstan on 5 June 2022, which demonstrated full public support of the democratic reforms initiated by President H.E. Kassym-Jomart Tokayev.
M. Ashimbayev also informed B.Amreyev on the preparations for the upcoming Congress of World Religious Leaders to be hosted by Kazakhstan in September 2022 and reiterated his invitation to the Secretary General to participate in the world’s most important religious event. Secretary General accepted the kind invitation with a great appreciation.
The Chairman of Senate and the Secretary General also exchanged views on number of pressing international topics of mutual interest.