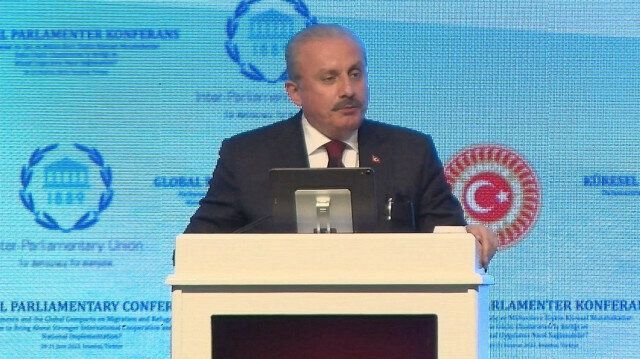 Türkiye’s parliament speaker stressed Tuesday the necessity to alleviate the heavy migration burden on certain countries, including his own, as well as the importance of ensuring fair burden-sharing.
“We can only achieve solidarity by accepting refugees to our countries duly and fairly in line with the rules of international law,” Mustafa Sentop said during his closing speech at the Global Parliamentary Conference on Migration.
Sentop underlined that burden-sharing should not be limited to just providing financial aid to host countries.
He said the Global Compact for Migration that was adopted in 2018 by the UN, constitutes an important roadmap for countries and it is significant to expand the application area of the agreement.
UN member states adopted the Global Compact for Safe, Orderly and Regular Migration during an Intergovernmental Conference in Marrakech in December 2018.
Sentop said another important element in the fight against irregular migration is ensuring border security.
"In this sense, our country, which is under serious migration pressure, has made and continues to make huge investments on the eastern border in recent years,” he said.
Violations against the rights of migrants must also be prevented while taking measures for border security, he noted.
"Türkiye, which has hosted the largest number of refugees in the world for the last eight years and gained serious experience in the fight against irregular migration, has shown once again, through this conference, that it is always open to sharing experience in this field," added Sentop.
The two-day conference co-hosted by the Turkish parliament and the Inter-Parliamentary Union ended Tuesday.