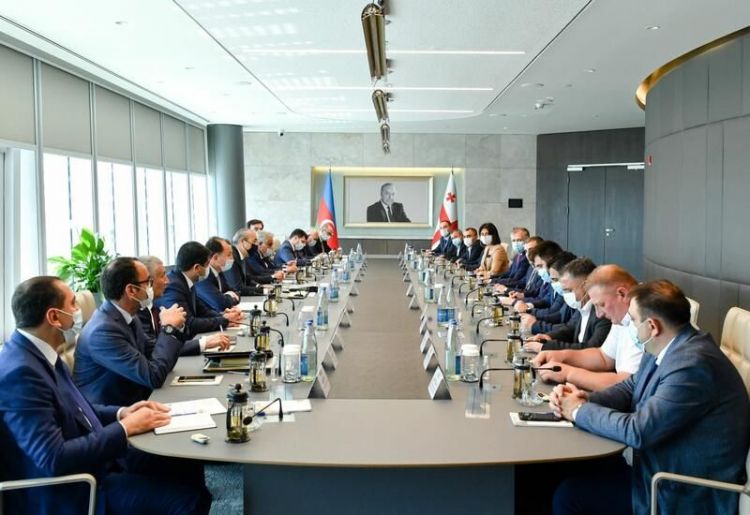 Azerbaijan and Georgia have signed the memorandums of understanding on the twinning of the cities of Shamkir-Marneuli, Agstafa-Gardabani, Goygol-Bolnisi, and Dashkasan-Dmanisi, Azernews reports.

The documents were signed during the meeting between Azerbaijan's Economy Minister Mikayil Jabbarov and Georgia's Kvemo Kartli region governor Giorgi Dokhturishvili, within the framework of his visit to Azerbaijan.

"The #MemorandumsofUnderstanding on the twinning of the cities of Shamkir-Marneuli, Agstafa-Gardabani, Goygol-Bolnisi, and Dashkasan-Dmanisi was signed within the framework of the visit of the governor of Kvemo Kartli region of Georgia Giorgi Dokhturishvili to our country. This is an important contribution to the strengthening and developing our relations," Jabbarov wrote on his official Twitter page.

During the meeting, the parties also shared their views on the benefits and prospects of successful cooperation between the two countries for the development of economic and trade relations.

Earlier, Giorgi Dokhturishvili held a meeting with Azerbaijani Prime Minister Ali Asadov. They discussed prospects of cooperation in trade, economy, transport and transit, investment, energy, and other spheres. The parties emphasized the vital role of collaboration between cities of the two countries in expanding the bilateral ties.

Azerbaijan and Georgia are collaborating in a variety of economic sectors. The two countries signed a number of cooperation agreements in 2021 as part of a meeting of the joint intergovernmental commission on economic cooperation.

Simultaneously, as part of the trilateral business forum held in Baku in December 2021, Azerbaijan, Georgia, and Turkey signed five memorandums and agreements on cooperation.