Bill will go to Republican-majority Senate where it is expected to fail as Republicans see such a restriction as going against the constitutional right to bear arms. 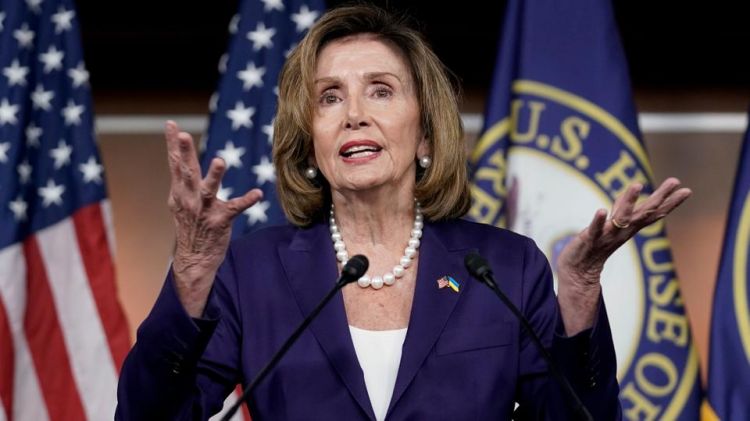 The US House of Representatives has passed a bill to revive a ban on certain semi-automatic guns, the first vote of its kind in years and a direct response to the firearms often used in the crush of mass shootings ripping through communities nationwide.
Speaker Nancy Pelosi on Friday pushed the vote toward passage in the Democratic-run House, saying the earlier ban "saved lives."
Pelosi displayed a poster of a gun company's advertisement for children's weapons, smaller versions that resemble the popular AR-15 rifles and are marketed with cartoon-like characters. "Disgusting," she said.
She called the latest bill a "crucial step in our ongoing fight against the deadly epidemic of gun violence in our nation."
President Joe Biden hailed the House vote, saying, "The majority of the American people agree with this common sense action."
He urged the Senate to "move quickly to get this bill to my desk."
However, it is likely to stall in the 50-50 Senate.
The House legislation is shunned by Republicans, who dismissed it as an election-year strategy by Democrats.
Almost all Republicans voted against the House bill, which passed 217-213.
Mass shootings plaguing US
The bill comes at a time of intensifying concerns about gun violence and shootings — the supermarket shooting in Buffalo, NY; massacre of school children in Uvalde, Texas; and the July Fourth shootings of revellers in Highland Park, Ill.
Gun reform remains deeply divisive in the United States –– despite the deadly scourge of mass shootings –– with only two Republicans joining Democrats to back the assault weapons ban in the House.
Congress passed a 10-year ban on assault rifles and certain high-capacity magazines in 1994 but lawmakers let it expire in 2004 and sales of the weapons and mass shootings simultaneously have soared since then.
In a statement, Biden said "40,000 Americans die from gunshot wounds every year and guns have become the top killer of children in the United States.
Republicans stood firmly against limits on ownership of high-powered firearms during an at times emotional debate ahead of voting.
"It’s a gun grab, pure and simple," said Republican Guy Reschenthaler, R-Pa.
Republican Jim McGovern said the weapons ban is not about taking away Americans' Second Amendment rights but ensuring that children also have the right "to not get shot in school."
For nearly two decades, since the previous ban expired Democrats had been reluctant to revisit the issue and confront the gun lobby. But voter opinions appear to be shifting and Democrats dared to act before the fall election. The outcome will provide information for voters on where the candidates stand on the issue.