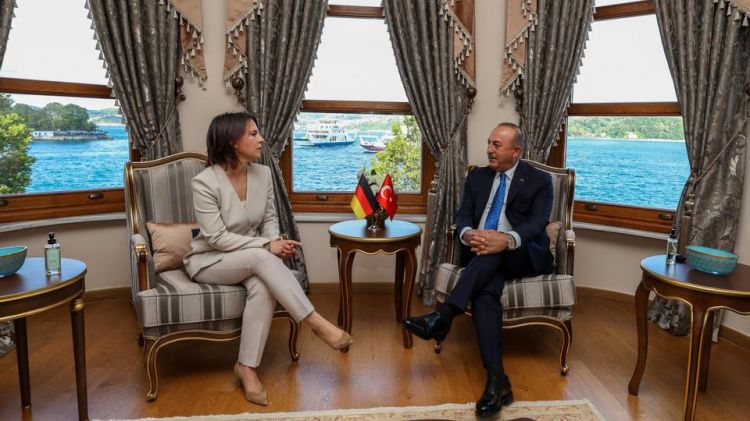 Türkiye has voiced concerns over Germany's counter-terrorism measures while rebuking Berlin for losing impartiality while mediating disputes between Türkiye and Greece.
"We see an increase in (terrorist) PKK activities in Germany and have conveyed Türkiye's concerns ... we expect concrete action," Foreign Minister Mevlut Cavusoglu told a joint press conference with his German counterpart Annalena Baerbock in Istanbul on Friday.
Cavusoglu said Türkiye expects its allies to support its anti-terror efforts rather than just say: "we understand your concerns."
Türkiye expects the European Union to lift political obstacles to its membership in the bloc, Cavusoglu said, and also conveyed Ankara's apprehensions over rising xenophobia and anti-Muslim sentiment in Europe.
Baerbock was paying her first visit to Türkiye after holding talks in Greece that came with old tensions between the two NATO defence alliance neighbours rising once again.
On Greek propaganda
Cavusoglu called on Germany to be wary of provocations and propaganda by Greece and the Greek Cypriot administration, insisting Berlin needs to listen to both sides without prejudice.
Arguing that Germany had lost its impartiality, Cavusoglu said: "Germany should keep its balanced attitude regarding the Aegean and East Mediterranean."
The Turkish minister said that turning a blind eye to Greece's human rights abuses is a violation of international law.
"What Greece is doing is unacceptable, stabbing the refugee boats, taking the clothes of refugees, and leaving them to die in cold weather. Nineteen migrants died this year," Cavusoglu said.
"Frontex, unfortunately, became a partner of these pushbacks and violations. The institutions of the EU have detected this, including the EU parliament and the European Anti Fraud Office. We hope serious investigations will take place into this issue," he said referring to the EU's border agency.
The top Turkish diplomat condemned the Greek militarisation of eastern Aegean islands and blasted Germany for siding with Athens "just because it is an EU member."
"Germany is biased about the island issue between Turkiye and Greece. On controversial issues, believing in propaganda and taking sides is not the right thing to do. That's not what we expect from Germany. We always appreciated Germany because they had always been an honest negotiator," Cavusoglu said.
He said Greece got the islands according to the 1923 Lausanne and 1947 Paris Peace treaties and some islands can't be armed according to those treaties.
"However, Greece is violating those treaties and arming those islands. Siding with Greece just because it is a member of the EU is not right," Cavusoglu added.