Liz Truss was left fuming by eco-protesters who stormed last night's Tory leadership hustings in Eastbourne before being removed by security. 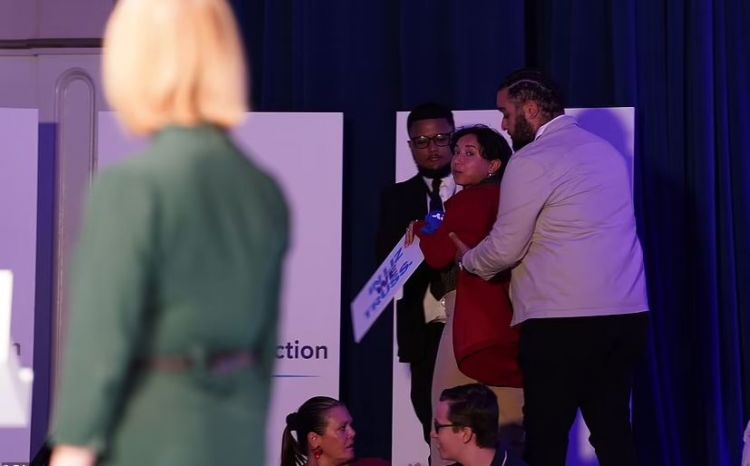 The Foreign Secretary snapped back at the eco-warriors who could be heard shouting 'shame' and calling for a Green New Deal to be implemented by a new Prime Minister.
Five protesters were kicked out of the Tory leadership hustings in Eastbourne after shouting 'shame on you' to Liz Truss, calling for a 'Green New Deal' and claiming to be the majority. Tory members in the audience could be heard chanting 'out, out, out!'
Ms Truss said that she would legislate to stop the likes of these protesters and vowed to clamp down on them immediately if she wins the leadership.
'I would legislate immediately to make sure that we are standing up to militant trade unions who stop ordinary commuters getting into work.
'And I would legislate to protect our essential services. I will make sure that militant activists such as Extinction Rebellion are not able to disrupt ordinary people who work hard and do the right thing and go into work.
'And I will never ever ever allow our democracy to be disrupted by unfair protests.'