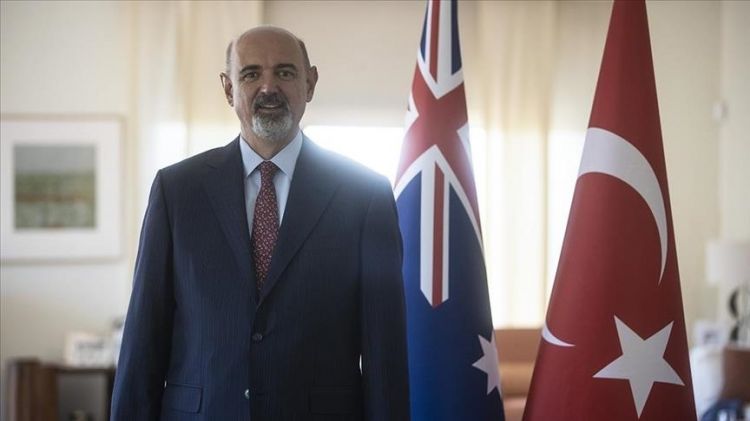 Australia's ambassador to Türkiye has said Canberra and Ankara have unusual and special relations that have transformed the historical legacy of the Gallipoli campaign, which pitted them against each other during WWI, into friendship and bilateral trade partners.
"It's a unique tie. And it's quite unusual in international relations for countries that have fought wars to then end up as very good friends and partners. So we're very proud of that linkage," Ambassador Miles Armitage told Anadolu Agency in an interview in Ankara, Türkiye’s capital.
The Gallipoli campaign was a World War I military campaign that took place on the Gallipoli peninsula, now Gelibolu in modern Türkiye, located in the southern part of East Thrace, the European part, with the Aegean Sea to the west and the Canakkale strait to the east.
"On the economic and trade side, bilateral trade is about $2 billion,” he said, adding that “for two G-20 economies, I think we need to do better. So that's certainly a priority for me to try to improve the bilateral trade and investment flows."
Armitage stressed that two Australian companies, a biotech and a fintech, have recently decided to establish operations in Türkiye. He added that the two states are likely to do better and collaborate more in high-tech fields.
"Also, on the political side, I think Türkiye and Australia are members of very similar organizations (…) G-20, OECD, (and) MIKTA. So we work very well together in those groups. And I think there's scope to do more," he said, vowing to focus more on the political front as there is room for political involvement between the two countries.
Since there are no direct flights between the two countries, the ambassador emphasized the importance of prioritizing the development of aviation agreements.
"Turkish Airlines flies everywhere in the world. It flies all across Southeast Asia, but it doesn't fly to Australia. So we're in discussions, and hopefully, we will find a way because I think it will benefit business relationships. It will benefit our people-to-people links, whether they are students or the more than 100,000 Australians of Turkish descent," he said, expressing his hope that the flight connections will be realized in the coming years.
The ambassador emphasized Türkiye's economy and manufacturing capacity, saying that anything can be produced in the country from white goods to cars and very sophisticated defense materials.
"It has been really impressive to me to see the advanced manufacturing capacity, and the fact that so much of what goes into Europe is actually made in Türkiye," he said.
Climate change
"We have always had to deal in Australia with fires, floods, (and) tropical storms. But I think it is becoming true that in the last few years, the events have been more extreme than we've seen in other parts of the world, (such as) the terrible fire last year in Türkiye, and of course, we had our fires in 2019," he said.
The new Australian government has already set a stated objective of reducing carbon emissions by 43% by 2030, according to Armitage.
He emphasized that by 2030, the electrical grid would be 82% renewables and that Australia is trying to accelerate the adoption of electric vehicles.
"We have some similarities with Türkiye because we too have relied on gas and coal for a lot of our electricity generation. And, like Türkiye, (we) have invested quite rapidly in renewable (energy). So it's been an interesting area of conversation for us. And I think there's more we can do together on the subject of climate change," he asserted.
First Nations
"Australia is home to the oldest living culture on the planet. The Australian government has announced its intention to legislate a voice in the Australian Parliament (…) an Indigenous voice. They plan to have a referendum, and then there will be further discussions in order to turn that into legislation. So that will be a very important step, I think, once again, to recognize our First Peoples and their presence in Australia at the time of European settlement," he said.
Armitage said the Australian foreign minister has announced the intention to develop a First Nations approach to diplomacy in this regard, where they hope to work on the issue both internationally, as well as domestically.