US congressional delegation in Taiwan amid tense standoff with China - ednews.net

US congressional delegation in Taiwan amid tense standoff with China 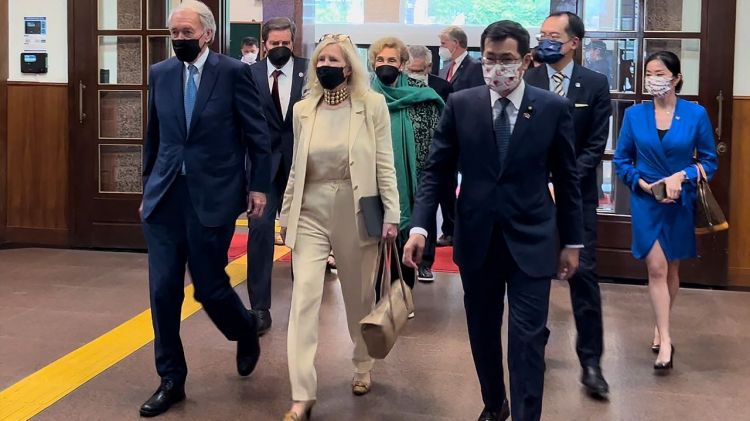 Less than a fortnight after US House Speaker Nancy Pelosi provocatively visited Taiwan raising tensions with China to fever pitch, a five-member US congressional delegation landed on the island on Sunday, further inflaming the already tense military standoff.
Washington is step by step deliberately undermining the protocols underpinning the One China policy that was the bedrock of US-China diplomatic relations established in 1979. The US ended diplomatic and military ties with Taiwan, de facto recognising Beijing as the legitimate government of all China including the island, and maintained limited unofficial contact with Taipei.
In the final days of the Trump administration, Secretary of State Mike Pompei ended all restrictions on contact between US and Taiwanese officials, civilian and military—a fundamental shift that the Biden administration has continued with minor changes. While White House officials and Pelosi insist that there is no change to the status quo, the visits are part of wider American political and military provocations aimed at goading China into a debilitating war over Taiwan.
Pelosi’s visit triggered the most dangerous military standoff across the Taiwan Strait in decades. Beijing backed its denunciations of Pelosi with live-fire naval, air and missile exercises at several points around the island. The US deployed a huge aircraft carrier, the USS Ronald Reagan, along with its full naval battle group, as well as two Amphibious Ready Groups (ARG) in waters close to Taiwan.
In the wake of the latest congressional visit, China on Monday announced a new round of “combat readiness patrol and combat drills in the sea and airspace around Taiwan island.” A Chinese defence ministry statement declared that the latest visit by US lawmakers demonstrated that the US was the “true agitator and breaker of peace and stability in the Taiwan Strait.”
Defence ministry spokesman Wu Qian bluntly stated: “We warn the US and the DPP authorities: using Taiwan to contain China is doomed to failure”—a reference to Taiwan’s ruling Democratic Progressive Party.
Taiwan’s defence ministry in turn condemned China’s latest military exercises, claiming the Chinese military had sent 30 aircraft on sorties near Taiwan, including 15 that crossed the median line in the narrow Taiwan Strait, separating the island from the Chinese mainland.
The US delegation was headed by Senate Foreign Relations Committee member Ed Markey who met with Taiwanese President Tsai Ing-wen yesterday to discuss security issues and closer US-Taiwan trade.
The bipartisan US delegation included members of the powerful congressional committees on the armed services, ways and means and foreign relations. John Garamendi is the chair of the House Armed Services Subcommittee on Readiness which has a direct input into the Pentagon’s spending on Taiwan’s military needs.
The delegation also met with Taiwan’s foreign minister Joseph Wu and held discussions with the Taiwanese legislature’s Foreign Affairs and National Defence Committee. Wang Ting-yu, a member of that committee, reported that the closed-door meeting with the delegation had discussed whether Washington should shift from a policy of “strategic ambiguity” to one of “strategic clarity.”
The US policy of “strategic ambiguity” signified that the US would not give a guarantee to Taiwan of military support in the event of a war with China. The “ambiguity” was not only meant as a warning to China, but was also designed to prevent provocative acts against China by Taiwan. China’s longstanding policy towards Taiwan, which it regards as a renegade province, is that it seeks peaceful reunification, but would use force if Taipei declared formal independence from the mainland.
The discussion with the Taiwanese parliamentary committee is part of a wider push to give unqualified US military backing to Taiwan against China—a move that would provoke a further backlash from Beijing and heighten the danger of conflict. President Biden has already de facto torn up the policy of “strategic ambiguity,” declaring on three separate occasions that the US had a “rock solid” commitment to defending Taiwan.
Senator Markey has a long record of backing Taiwan against China, as witnessed by his participation in the Senate Taiwan Caucus. He has actively promoted legislation aimed at undermining the One China policy and promoting direct official ties with Taiwan, including the Taiwan Partnership Act enhancing cooperation between the US National Guard and Taiwan’s military.
The US delegation also discussed semi-conductor supply chains with Taiwanese officials. The Taiwan Semiconductor Manufacturing Company dominates the global manufacture of computer chips, producing more than half of the world’s supplies and meeting over 90 percent of the global demand for the most advanced semi-conductors.
President Tsai told Markey that President Biden’s recent signing of the Chips Act would provide more incentives for Taiwanese investment in the US. The US military has been seeking to consolidate its supply chains, including for advanced semi-conductors that are absolutely vital for the sophisticated electronics built into its weapons systems.
The US congressional delegation to Taiwan this week is just the latest action aimed at provoking China into a war. More provocations are already on the drawing board. Bonnie Glaser, director of the Asia program at the German Marshall Fund of the United States, told the New York Times: “Many congressmen want to visit to show US support [for Taiwan],” with another congressional group expected to visit Taiwan before the end of the month.
Last Friday Kurt Campbell, a deputy assistant to Biden and Coordinate for the Indo-Pacific, hypocritically condemned China’s response to Pelosi’s visit as “provocative, destabilising and unprecedented,” but then declared that the US would send warships and planes through the Taiwan Strait in the next few weeks.
Any “freedom of navigation” operation by American warships through the Taiwan Strait at this time is a calculated and utterly reckless attempt to further inflame already high tensions with China, knowing that any military incident or accident could rapidly lead to a conflict with incalculable consequences.