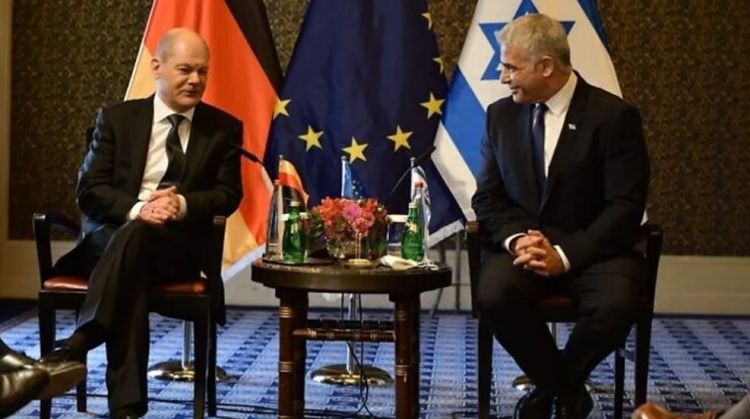 Israeli Prime Minister Yair Lapid on Thursday spoke with German Chancellor Olaf Scholz following remarks made by Palestinian Authority leader Mahmoud Abbas claiming that Israel committed "50 Holocausts" against Palestinians.
During the telephone call the chancellor said that "he rejects and condemns Palestinian Authority Chairman Mahmoud Abbas’s remarks, and that it was important for him to clarify this personally to the Prime Minister, as well as publicly," according to an official statement.
Abbas made his controversial comments during a joint press conference with Scholz in Berlin on Tuesday. The chancellor was criticized for not immediately responding to them. In his statement posted later on Twitter, he referred to Abbas' remarks as “outrageous."
Lapid thanked Scholz "both as the Prime Minister of Israel, and as the son of Holocaust survivors."
The two leaders also discussed Iran's nuclear issue.
"The Prime Minister reiterated Israel’s opposition to a return to the nuclear agreement, and the need for Europe to send a clear and unequivocal message that there will be no more concessions to Iran," the statement said, adding that "Europe must oppose Iran buying time in negotiations."
Lapid and Scholz emphasized the importance of ties between Israel and Germany and agreed to meet soon.