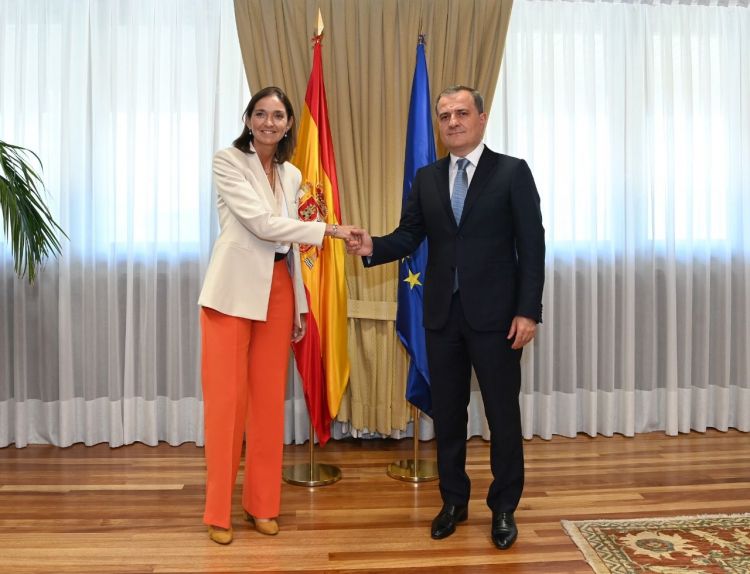 Bayramov delivered the remarks during a meeting with Spanish Industry, Trade and Tourism Minister Maria Reyes Maroto on September 7, 2022, as part of his official visit to Spain.

He stressed that the prospects of cooperation between the two countries in the sphere of trade, energy, and tourism are increasing.

Speaking about Azerbaijan's energy initiatives and the prospect of Spanish business circles engaging in such projects, the minister stressed the importance of this for the development of bilateral ties. He identified tourism as a significant component of collaboration between the two countries.

Describing Azerbaijan's post-conflict peace-building and reconstruction efforts, the minister emphasized that there is huge potential for collaboration in the development of the mining sector, agriculture, tourism, and alternative energy resources in the liberated lands.

In reply, Maroto expressed optimism that the Azerbaijani minister’s visit will help to develop relations between the two nations, adding that Azerbaijan is a country of great interest to Spain, and the country is particularly interested in economic, trade and tourism cooperation.

The Spanish minister pointed out that Azerbaijan is an important commercial partner for Spain, and reciprocal investments are crucial in this respect. She further highlighted that Spain is interested in diversification of economic relations, cooperation in the post-pandemic period, and investments in the region after the war.

The minister stressed that Spain has wide opportunities in the field of civil construction, construction, and development of alternative energy resources and the government is always ready to discuss the perspectives of cooperation, as well as the role of the Alat Free Economic Zone with Azerbaijan in this regard.