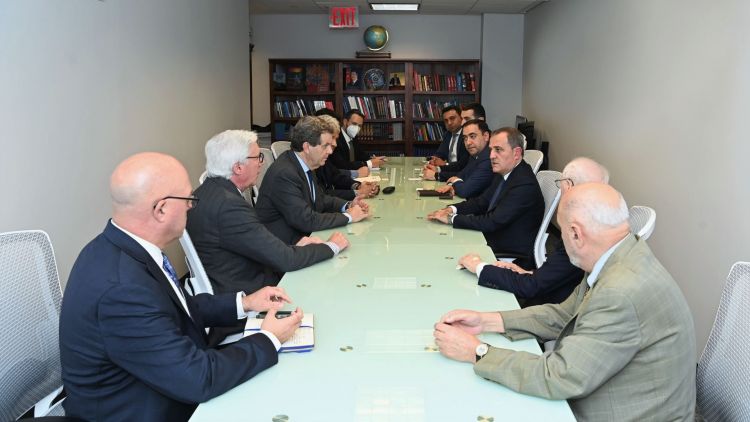 Bayramov made the remarks at the meeting with leaders and representatives of the American Jewish Committee (AJC) and the coalition of American Jewish organizations on the margins of the 77th UN General Assembly session in New York.

At the meeting, topics such as cooperation with US Jewish organizations, as well as future prospects, and the regional situation were discussed.

Bayramov stressed that Azerbaijan attaches a high value to maintaining close links with Jewish communities across the world, recalling the existence of several synagogues, Jewish cultural institutions, and schools in the country.

The recent situation in the South Caucasus, as well as the activities carried out by Azerbaijan in the post-conflict period following the 44-day war, was discussed at the meeting.

Bayramov briefed the opposite side about the large-scale restoration and construction work carried out by Azerbaijan in the territories liberated from the Armenian occupation. He also spoke about the deliberate destruction of Azerbaijani territories and the cultural heritage by Armenia during the occupation.

The interreligious harmony, tolerance, multiculturalism, mutual understanding, friendly neighborliness, and peace between the Muslim, Christian, and Jewish populations of Azerbaijan were highly appreciated by the Jewish organizations.

It was highlighted that Azerbaijan's Jewish population, which has lived in peace and serenity in the nation for generations, contributes to the establishment of strong cooperation between Azerbaijan and Israel.

At the meeting, views were also exchanged on the development prospects of Azerbaijan's relations with the United States of America.