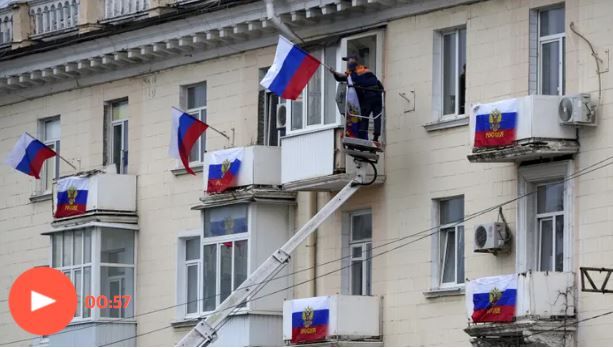 President Volodymyr Zelenskiy has said Ukraine will “defend” its citizens in Russian-occupied regions, as authorities there announced the results of so-called referendums that have already been denounced by the west.
“This farce in the occupied territory cannot even be called an imitation of referendums,” Zelenskiy said on Tuesday in a video posted on Telegram. “We will act to protect our people: both in the Kherson region, in the Zaporizhzhia region, in the Donbas, in the currently occupied areas of the Kharkiv region, and in the Crimea.”
The Ukraine president’s comments came as officials in four Moscow-occupied regions of the country claimed victory in the referendums, which have been condemned by western leaders as sham ballots.
The local poll body in the southern Zaporizhzhia region said 93.1% of voters opted for Russian annexation after all ballots were counted, adding that this was a preliminary result.
In Kherson, also in the south-east, authorities said 87% of voters opted for Russian annexation after a vote count was completed.
In eastern Ukraine’s Luhansk region, controlled by pro-Russia separatists, 98.4% opted for annexation by Russia, Russian news agencies said, citing local authorities. “It is clear” that Luhansk would return to the Russian fold, Leonid Pasechnik, the leader of the self-proclaimed Lugansk People’s Republic, said on Telegram.
In the neighbouring Donetsk region, the poll body said 99.2% of voters opted for Russian annexation after all ballots were counted, according to news agencies.
The US secretary of state, Antony Blinken, said the west would never recognise Russia’s annexation of Ukrainian territory, which he called part of a “diabolical scheme” by Moscow.
Nato denounced the referendums as a “sham” and “violation of international law”.
The United Nations said it was committed to Ukraine’s territorial integrity within recognised borders.
Earlier, in an address to the UN security council, Zelenskiy warned that Ukraine would not be able to negotiate with Russia after the votes.
“Russia’s recognition of the pseudo-referendums as ‘normal’, implementation of the so-called Crimean scenario, and yet another attempt to annex Ukrainian territory means that there is nothing to talk about,” he said in a video message.
“In front of the eyes of the whole world, Russia is conducting an outright farce called a ‘referendum’ on the occupied territory of Ukraine,” he said.
“People are forced to fill out some papers for a TV picture under the muzzles of machine-guns. The figures of the alleged results of the pseudo-referendum were drawn in advance.”
President Vladimir Putin is scheduled to address both houses of the Russian parliament on Friday and may use the address to formally announce the accession into Russia of the Ukraine territories that held referendums, the British Ministry of Defence said in its latest intelligence update.
Putin said on Tuesday that Russia wanted to “save people” in the territories.