Erdogan calls on Putin to give negotiations on Ukraine war another chance - ednews.net 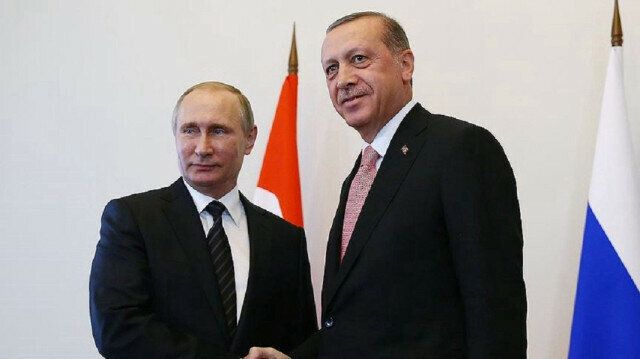 The Turkish president in a phone talk on Thursday called on his Russian counterpart to give negotiations another chance on the war in Ukraine.
According to a statement by Türkiye’s Communications Directorate, Recep Tayyip Erdogan reiterated Türkiye's willingness to play a facilitator role to help end the war in Ukraine and called on his Russian counterpart Vladimir Putin to give negotiations with Ukraine another chance.
During the talk, Erdogan also expressed pleasure over the successful Moscow-Kyiv prisoner swap as well as the functionality of the Istanbul deal on grain exports.
Extension of the grain export deal is a common interest, the Turkish president said on the grain export mechanism which will expire in November, and added that efforts also continue on the export of Russian grain and fertilizers.
Erdogan pointed out the need for steps to reduce tensions in the region and said Russia is expected to take steps, particularly on the annexation of Ukraine's Donetsk, Luhansk, Kherson, and Zaporizhzhia regions.
The Ukrainian separatist regions of Donetsk and Luhansk and Russian-controlled parts of Zaporizhzhia and Kherson held referendums Sept. 23-27 on joining Russia.
The Russian Foreign Ministry said Wednesday that more than 98% voted in favor of joining Russia.
The polls have been widely condemned by the international community, with European nations and the US calling them "sham" and saying they will not be recognized.
- Nord Stream leaks are 'international terrorism'
Putin told Erdogan that Nord Stream leaks are an "act of international terrorism" and reminded that Russia is bringing this issue up for urgent discussion in the UN Security Council, according to a statement by Kremlin.
On Wednesday, Russian authorities opened an "international terrorism" case over the recent Nord Stream gas leaks.
Four leaks have been confirmed in the Nord Stream 1 and Nord Stream 2 gas pipelines under the Baltic Sea.
The Russia-owned Nord Stream 2 pipeline, originating in Russia and passing under the Baltic Sea to Germany, was constructed to double the volume of gas.
However, as soon as the construction finished, Germany decided to halt operations after the start of Russia’s war on Ukraine this February.
Moscow stopped the gas flow from the Nord Stream 1 pipeline on Aug. 31.
The Russian president, during the phone talk, expressed his appreciation for Türkiye's role in grain export from three Ukrainian Black Sea ports.
The two leaders also agreed to continue the Russian-Turkish dialogue in various formats, added the statement.
Türkiye, the UN, Russia, and Ukraine signed an agreement on July 22 in Istanbul to resume grain exports from three Ukrainian Black Sea ports, which were paused after the Russia-Ukraine war began in February. A Joint Coordination Center with officials from the three countries and the UN was set up in Istanbul to oversee the shipments.