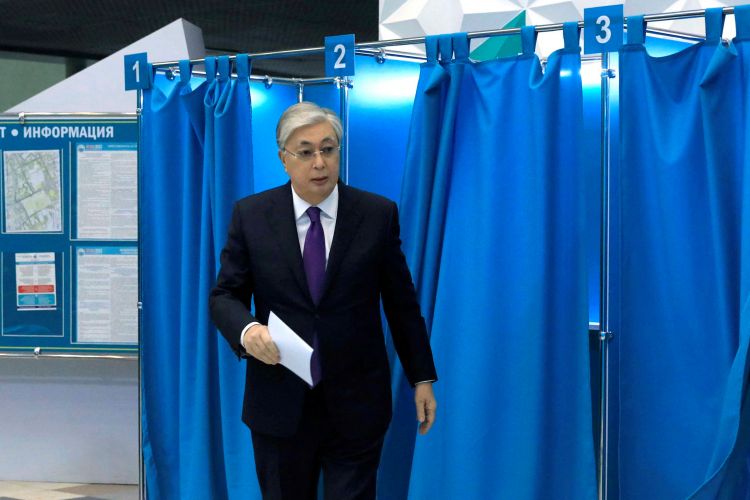 The Republic of Kazakhstan has held another snap presidential election which vividly reflects another “victory” of democratic norms and “free will” of the voters. It was fair, free and transparent up to the international standards. The turnover was very high which showed political “maturity” of all the political parties and utmost sense of duty of all the voters in the country.

It is indeed the “beauty” of Kazak democracy that two women along with six different political parties rigorously participated in the recently held snap presidential election which showed high level of “politicization” and “democratization”, “women empowerment” in electoral process and last but not least, democratic diversification and political diversity in Kazakhstan.

There were 10,101 polling stations across Kazakhstan, including 68 stations at the country’s foreign missions in 53 countries.

The CEC has accredited more than 614 observers. In addition, 254 foreign reporters have been accredited to cover the election.

According to recent constitutional changes, President Tokayev will remain in the office for a 7 year term without the right to re-election. It was the seventh presidential election in Kazakhstan since the country’s independence in 1991.

According to the OSCE Office for Democratic Institutions and Human Rights (ODIHR) interim report/ statement the snap presidential election was seriously lacked competitiveness.

The OSCE interim report/statement raised certain concerns about lack of genuine pluralism in the political system and presidential race in the country which is again not true because in recent months numerous political reforms have been initiated and implemented to create strategic balance among the different organs of the State and country has already started its political journey towards more liberalized democratic system.

Frankly speaking the political system of Kazakhstan is vibrant, diversified, dynamic, productivity and participatory in all aspects of delivery, people’s wellbeing, social development, social justice, role of the law and last but not least, formation of listening state. Furthermore its society, system, and state is pluralistic because every citizen has equal right of association, voting, free will, political affiliation and last but not least, preserve human rights.

During the presidential election every political party has equal right of electioneering, meetings, political activities and media projection on TV, Radio and print media. Although RSF, the Reporter without borders & 30 international & local NGOs wrote an open letter to Kazakhstan president for free, fair and transparent election and easy & smooth access of Internet before, during and after the election, the CEC observed it and even social media remained free and active during this political bout.

The OSCE Interim report bluffed that the incumbent president was the joint candidate of all parliamentary parties and, was not meaningfully challenged in a low-key campaign. In fact the incumbent president Tokayev was nominated by his own political party which had nothing to do with other contesting political parties and their selected candidates.

In its report it wrongly claimed that common citizens did not fully participate in political life and other associated activities during the presidential election 2022.

On the other hand, common people, supporters of all political parties and voters were completely free to participate and did not constrain to any political leverage or administrative limitations. Political atmosphere remained positive, productive and participatory.

It seems that the OSCE interim report intentionally created diverging propositions for maligning the political system of the country by terming the political campaign as scarce with absence of analytical reporting, including online, limited voters’ ability to make an informed choice. Presidential election was held according to the SOPS of the CEC of Kazakhstan and there was no major functional or administrative lapse during the electioneering and especially on the Election Day. There was no evidence of pre or post-election rigging from any organ of the state or implicit electoral engineering from any political party in the said election.

Interestingly, the OSCE praised the Central Election Commission for managing the electoral preparations efficiently and providing comprehensive training for lower-level commissions but ironically raised serious concerns about so-called important safeguards the counting and tabulation process, undermining transparency. It is not based on any concrete documentary or circumstantial evidence and mainly relied on fake, false and fictional propaganda.

All the election related laws were followed and implemented in their true spirits which succeeded a fair, free and transparent election. However, further reforms in terms of publicity, political campaign, constructive political dialogue and political opposition should be pursued.

The OSCE viewed that independent candidates were not allowed to run for president, and the eligibility requirements, including those concerning education, residency and experience in the civil service or elected government office, were at odds with OSCE commitments and other international standards.

In this regard, I elaborate that every country has its own democratic traditions and socio-economic preferences and political priorities which should be respected because no democratic system is 100 percent perfect and proficient in the world. Good thing is that the government of Kazakhstan is trying its best to initiate all possible electoral reforms to further strengthen its journey towards pure and liberalized democracy in the days to come.

Despite its biased report, there was no reported incident of censorship in media, denial of basic human right pertaining to freedom of speech, and access to information in the country and especially during the presidential election.

There was no so-called restrictive legal framework and its uneven implementation in the political system of the country. Interestingly, not a single incident was reported about use of power and attacks against journalists. Ultimately, all TV channels equally monitored and provided legal provisions for equal coverage in the news.

The Constitution, the Election Law and other election-related legislation have been revised and refined several times which has further strengthened its massive drive of meaningful politicization and democratization.

Interestingly recent digitalization initiatives in the justice sector have facilitated the procedure of complaint submission and increased the responsiveness of state bodies, and the disputes were transferred from civil to specialized administrative courts which are good omen for the country, its political system and socio-economic prosperity.

The incumbent president Tokayev initiated lots of reforms that have further strengthened the parliament, reduced presidential powers and limited the presidency to a single seven-year term.

To conclude, the recently presidential election in Kazakhstan was free, fair and transparent. It has started a new chapter in the political history of the country, limiting the presidential tenure only to 7 years for only time. It has started a new political discourse which is pragmatic, pluralistic, positive, productive and participatory. It has further consolidated scope of political opposition in the prevailing political system in the country.

Elections have been taking place regularly since its independence 1991 and presidential election on November 20 should be considered as one of the most consequential for the future of democratic politics in Kazakhstan.

It seems that the implementation of concrete reforms has ensured a bright future. Hopefully, constitutional amendments and outcome of presidential election would instrumental to eradicate monopolization and ensure a fair distribution of the national income.

It has already reduced the presidential term from two five-year terms to a single seven-year period without the possibility of re-election. Hopefully, this initiative will eliminate the risks of power monopolisation and strengthen the basic principles of democracy.

Critical analysis reveals that incumbent President Tokayev has rightly decided to seek a democratic confirmation of his mandate for the fundamental transformation of Kazakhstan over the next seven years.

This election has further ensured gender equality which has promoted women’s role in business and politics which is good omen.

Kazakhstan’s presidential nominations process was open and fair. All candidates received signatures from 1 percent of Kazakhstan’s registered electorate around 118,000 people equally representing at least two thirds of regions, cities of republican significance and the capital. Six candidates, representing different policies and visions for the country, have received support from many citizens. This is further evidence of functional democracy in the country.

Democracy is a broad and diverse system of good governance and delivery. In this regard, Kazakhstan is the real champion of people free choice in the region as well as in the world since its inception. It has various salient features i.e. respect for basic human rights, a multi-party political system based on political tolerance, political opposition, a democratic voting system, respect for the rule of law, democratic governance and the last but not the least, citizen participation which has successfully reflected in the most recently held presidential election on November 22, 2022.

It is indeed blessed with golden principles of modern democracy. Its Constitution guarantees basic human rights. Its “Election Law” furnishes development of political parties due to which it has multi-party democracy. Its traditions and historic traits are tolerant due to which it has tolerant society and political atmosphere too. Again, its Election Law protects and provides equal rights to all the participating political parties and voters in order to uphold the true spirits of free choice.

Modern democracy is based on fair, free and transparent elections in which the rulers are elected by the people and of course those currently in power have a fair chance of losing and snap presidential election of November 20 holds the true spirits of modern democracy.

I believe that holding of a snap presidential election will further strengthen its political system, economic reforms, national drive of massive industrialization, development of renewables and provide state policy clarity towards various regional as well as international engagements.

Hopefully it will streamline process of democratization in the country. It will further enhance elements of political stability and economic maturity in the state’s decision making. It will also consolidate legitimacy of the system and functionality of new president to achieve the desired goals of socio-economic prosperity, green transformation, fair, free society, equitable economic system, balanced regional economic development, political diversity and last but not least, liberalized democracy in the days to come.