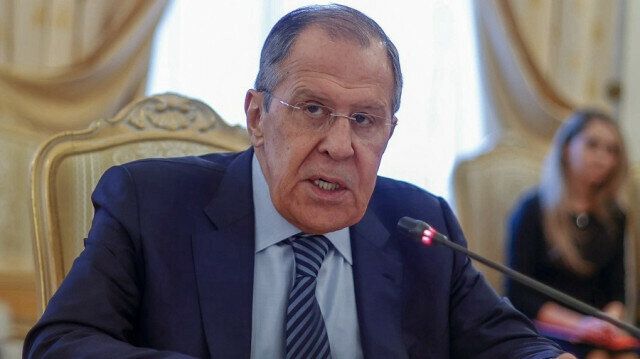 Russian Foreign Minister Sergey Lavrov warned on Thursday that no war should be waged between nuclear states since even a conflict starting with conventional weapons may turn into a nuclear war, Ednews reports citing Yeni Safak.

Lavrov recalled that Russian and US presidents jointly confirmed in June 2021 that a nuclear war cannot be won and must never be fought, and that there is a similar statement adopted by five nuclear states.

"As I have already said, we were ready to go further and say that not only a nuclear war but any war must not be unleashed between nuclear states, it is unacceptable," he told a news conference on security issues in Moscow.

The US and NATO directly involved in the conflict in Ukraine, not only through delivering weapons but also training servicemen, Lavrov said.

He refuted reports about strikes on civilian infrastructure in Ukraine, stressing that the infrastructure that feeds the combat potential of the Ukrainian army is currently under attack.

"Our Defense Ministry and military experts, not only Russian but also American, as well as military experts from other NATO countries pay attention to the fact that our military operation was implemented from the very beginning in the mode of minimizing any negative consequence for the civilian population and civilian infrastructure," he said.

Moscow is not seeking peace talks "to gain time to gather additional forces for a special military operation," the top diplomat said.

"This is ridiculous and unpleasant because people are lying, they are openly lying. We have never asked for negotiations, but we have always said that if someone has an interest in a negotiated solution, we are ready to listen," he asserted.

On the exchange of prisoners between Moscow and Washington, Lavrov said the Russian and US presidents agreed in June 2021 in Geneva to create a special channel between special services to address this particular topic.

"It is working and I hope some results will be achieved there," he said.

Asked about the price caps on the Russian oil, Lavrov said Moscow will not sell energy resources to the countries that introduced restrictions because any concession in this matter will lead to dissemination of price caps on other products.

"With India, China, Türkiye and other major buyers of Russian energy resources, a balance of interests in terms of timing, volume and price is always observed. But this should be decided on a mutual basis between the producer and the consumer, and not by some 'uncle' who just decided to punish someone," he said.

Russia seeks transition to a system independent of neocolonial methods, not getting little more revenue for its oil, Lavrov stressed.