Armed attack on the Azerbaijan Embassy in Tehran - "Yasin Huseynzadeh, is likely to be working for SEPAH" - EXCLUSIVE
Read: 303

A delegation of Taliban officials arrived in Tehran to attend a quadrilateral meeting that is slated to be held jointly by Afghanistan, Iran, Pakistan, and the United Nations High Commissioner for Refugees. 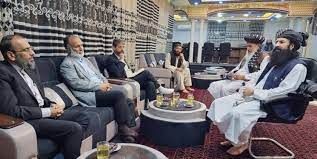 The officials of the Afghan Ministry of Refugees And Repatriation say that the problems of Afghan immigrants in Iran and the solutions to solve them are set to be discussed during the summit.
"Together with the Islamic Republic of Iran and Pakistan, we will sign an agreement on how to solve the problems so that the immigrants return to the country voluntarily," Abdul Rahman Rashid, the Taliban's acting deputy minister of refugees said.
A number of Afghan immigrants and refugees living in different countries say that they are facing many problems and challenges.
A number of Afghan citizens say that the purpose of immigrating to Iran is economic problems.
More than six million Afghan migrants are currently living in Iran and Pakistan, according to the statistics provided by the Afghan Ministry of Refugees And Repatriation.