'Our impression is that various parties are returning to realism,' says Iranian Foreign Minister Amir-Abdollahian 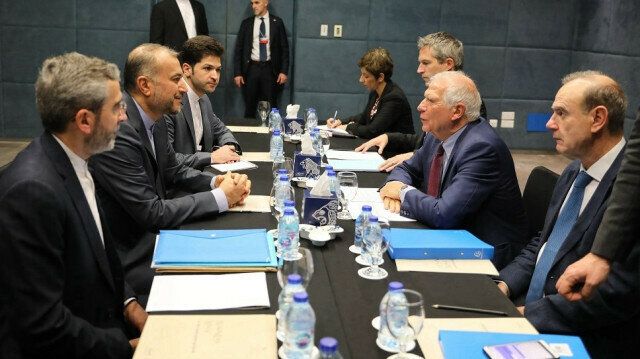 Iran’s Foreign Minister Hossein Amir-Abdollahian on Wednesday said the parties to the 2015 nuclear deal are “returning to realism,” adding that Tehran will take a final step if its “red lines are respected.”
Amir-Abdollahian made the remarks in Jordan’s capital Amman while boarding a flight back to Tehran after attending the second edition of the Baghdad conference.
He said his meeting with EU foreign policy chief Josep Borrell on the sidelines of the summit on Tuesday provided an “opportunity to discuss issues” related to the Vienna talks.
The indirect talks between Tehran and Washington, brokered by the EU, have been stalled since August due to key disagreements on the draft proposal, as well as the row over the UN nuclear watchdog’s probe into uranium traces found at three “undeclared nuclear sites” in Iran.
The sweeping protests in Iran in recent months, along with claims of Iran supplying drones to Russia for the Ukraine war, have further inflamed tensions between Tehran and the US.
Amir-Abdollahian accused the American side of “hypocritical behavior” in recent months, saying they “took actions that did not match their words.”
“Our impression is that the various parties are returning to realism, and we also announced that if our red lines are respected, we are ready to take the final steps to reach an agreement,” he said.
Iran has recently taken several steps to ramp up uranium enrichment amid the row over the UN nuclear watchdog’s probe that Iran insists should be dropped.
A delegation of the International Atomic Energy Agency (IAEA) visited Tehran earlier this week for talks with Iranian officials on resolving the spat.
In his address to the Baghdad summit, the Iranian foreign minister said his country was “serious” in reaching a “good, strong and stable agreement” in Vienna.
During the meeting with Borrell, the top Iranian diplomat said he expressed Tehran’s readiness to conclude the protracted talks “based on the draft achieved as a result of months of difficult and intensive negotiations.”
“I thanked Mr. Borrell for his constructive role in the #JCPOA revival talks, and told him that Tehran is ready for a conclusion with consideration of Iran’s red lines and the drafts on the table,” he later wrote in a tweet.
Borrell said his meeting with Amir-Abdollahian in the Jordanian capital was “necessary … amidst deteriorating Iran-EU relations.”
“Stressed need to immediately stop military support to Russia and internal repression in Iran,” he wrote on Twitter.
“Agreed we must keep communication open and restore #JCPOA on basis of Vienna negotiations.”