Erdogan WARNED the West - If the closure of consulates continues...
Read: 173 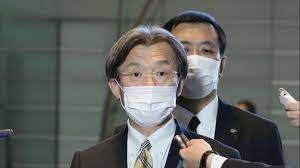 Scandal-hit reconstruction minister Kenya Akiba handed in his resignation and was effectively dismissed by Japanese Prime Minister Fumio Kishida on Tuesday, in a fresh blow to his Cabinet that has seen four of its members leave their ministerial posts within around two months.
Kishida has tapped Hiromichi Watanabe, who served as reconstruction minister between 2018 and 2019, as Akiba's successor, the incoming minister said.
Akiba, who has been embroiled in political funds and other scandals, has met growing calls to quit before a regular parliamentary session begins in late January, not just from opposition parties but also from within the ruling Liberal Democratic Party to which he belongs.
Akiba's effective dismissal by Kishida is seen as prompted by the desire of the government and ruling party to avoid deliberations on the fiscal 2023 budget and other key bills from being hampered by opposition attacks on the minister.
After tendering his resignation to the premier, Akiba told reporters he has made the "tough decision" so as not to stall Diet deliberations.
His departure will take a heavy toll on Kishida, who has seen his Cabinet's approval ratings approach what is viewed as the "danger level" of 30% ahead of a string of local elections coming up in April.
In a related move, Mio Sugita, a parliamentary vice minister for internal affairs and communications, also resigned Tuesday as she has been under fire for her past controversial remarks and behavior after taking up the governmental post in August.
Akiba, who took office in August in his first ministerial appointment, has been embroiled in allegations that he violated the public offices election law and misused political funds while also coming under fire over his relationship with the Unification Church.
A weekly tabloid magazine reported that Akiba had paid around 200,000 yen ($1,500) to his state-paid secretaries to help with his reelection bid in the lower house election in October 2021.
Such an action could constitute illegal payments to campaign staff under the election law.
The lawmaker also admitted that two political groups related to him paid 14 million yen in office rent to his wife and mother between 2011 and 2020. However, his mother failed to declare the taxable income.
Akiba had denied any links with the Unification Church, but he acknowledged in November that an LDP branch he heads paid 48,000 yen to two entities associated with the religious group in 2020 and 2021 as magazine subscription fees.
Connections between LDP lawmakers and the Unification Church, founded by a staunch anti-communist in South Korea in 1954, have become one of the major factors in dragging down the approval ratings of Kishida's Cabinet.
Tetsuya Yamagami, accused of fatally shooting former Japanese Prime Minister Shinzo Abe in July, told investigators that he held a grudge against the group over huge donations made by his mother. He targeted Abe in the belief the former prime minister had links to the group, according to investigative sources.
The support rate for Kishida's Cabinet dropped to 33.1%, the lowest since its launch in October last year, in the latest Kyodo News survey last week.
Daishiro Yamagiwa, who served as economic minister, was forced out of the Cabinet on Oct. 24, after a flurry of revelations of his ties with the group emerged. Then Justice Minister Yasuhiro Hanashi and then internal affairs minister Minoru Terada also stepped down over gaffes and political funds scandals, both in November.