Has another interstellar visitor been found? | Eurasia Diary - ednews.net

'We have no secret' - Putin reveals he informed Medvedev about government resignation
Read: 399

Has another interstellar visitor been found? 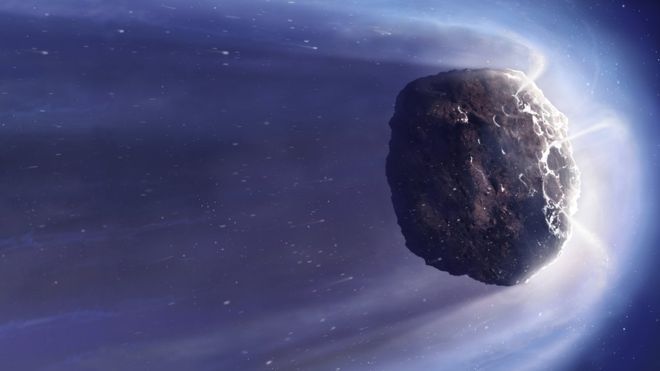 An amateur astronomer has discovered a comet that could come from outside our Solar System, BBC reports.

If so, it would be the second interstellar object after the elongated body known as 'Oumuamua was identified in 2017.

The Minor Planet Center (MPC) at Harvard University has issued a formal announcement of the discovery.

The newly discovered object - initially given the designation gb00234, but now known as Comet C/2019 Q4 (Borisov) - has an eccentricity of 3.2, based on current observations.

It was noticed by the amateur stargazer Gennady Borisov on 30 August at the Crimean Astrophysical Observatory in Bakhchysarai. At the time, it was about three astronomical units (about 450 million km) from the Sun.

'Oumuamua, discovered on 19 October 2017, was initially classified as a comet, based on its hyperbolic trajectory. But further observations detected no sign of a coma - the fuzzy envelope around the nucleus of a comet. C/2019 Q4 (Borisov), on the other hand, is clearly an active comet, with a visible coma and tail.

Unlike the small, faint 'Oumuamua, the new object seems to be very large - around 20km wide - and bright.

In addition, 'Oumuamua was also spotted after its closest approach to the Sun (perihelion), so it wasn't visible long enough for astronomers to answer the many questions they had. C/2019 Q4 (Borisov), meanwhile, is still approaching our Solar System and shouldn't reach perihelion until 10 December.

The Minor Planet Center announcement called on astronomers to make follow-up observations. According to the MPC, "absent an unexpected fading or disintegration, [C/2019 Q4] should be observable for at least a year".

This would give observers an exciting opportunity to characterise the properties of an object that could have originated around a distant star.

Astrophysicist Karl Battams, from the Naval Research Laboratory in Washington DC, tweeted: "Unlike 'Oumuamua, whose asteroid-or-comet nature still gets debated, this one is definitely a comet.

"If it is unequivocally interstellar, it'll be fascinating to see how its composition (spectral properties) compares to the variety we see in comets from our own Solar System."

Astrophysicist Simon Porter, from the Southwest Research Institute (SwRI) in San Antonio, Texas, who has been tracking the object, added on Twitter: "With such a bright coma, we should be able to get beautiful spectra of Q4 and hopefully measure isotopic ratios."

Isotopes are different forms of the same chemical element. He added that these ratios could be different from those of "domestic" comets.