There is no power structure in the world that can deal with issue of this scale - Armenia PM to people
Read: 382

Analyst thinks if Turkey and Russia maintains its presence high in Libya, partition is unavoidable
Read: 353

Nobel prize in chemistry awarded for work on lithium-ion batteries 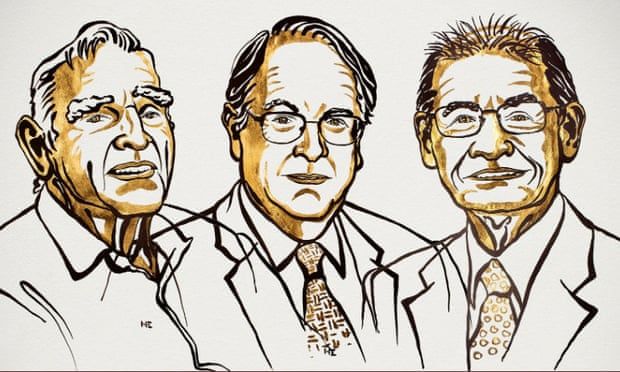 The Nobel prize in chemistry has been awarded to three scientists for their work in developing lithium-ion batteries.

John B Goodenough of the University of Texas at Austin, M Stanley Whittingham of Binghamton University and Akira Yoshino of Meijo University will receive equal shares of the 9m Swedish kronor (£74o,000) prize, which was announced by the Royal Swedish Academy of Sciences in Stockholm on Wednesday.

At 97 years old, Goodenough is the oldest laureate to receive a Nobel prize in any discipline; Whittingham is the second British-born researcher to win a science Nobel this year.

Lithium-ion batteries have long been tipped for the award, not least since they have proved pivotal in the development of the high-tech world we inhabit. Far lighter and more compact that earlier types of rechargeable battery, they are found in everything from mobile phones to laptops and electric cars.

“The batteries no longer weight two tonnes, but 300kg,” said Prof Sara Snogerup Linse, a member of the Nobel Committee for Chemistry. “The ability to store energy from renewable sources, the sun, the wind, opens up for sustainable energy consumption,” she added.

When asked how it felt to receive the call, Yoshino simply said “Amazing, surprising”.

Speaking in an interview earlier this year (£), when a blue plaque commemorating his work was put up at Oxford University, Goodenough said he didn’t appreciate the impact his work would have.

“At the time we developed the battery it was just something to do,” he said. “I didn’t know what electrical engineers would do with the battery. I really didn’t anticipate cellphones, camcorders and everything else.”

Prof Saiful Islam, a researcher in the field at the University of Bath and who gave the 2016 Royal Institution christmas lectures, welcomed the news, saying the trio’s work helped to power the portable revolution.

“In my view, this award is long overdue and it’s great to see that this important area of materials chemistry has been recognised,” he said.

Prof Mark Miodownik, a materials expert at University College London, agreed lithium-ion batteries should be celebrated. “They are one of the most influential pieces of materials science that influence the modern life of everyone on the planet. It remarkable too that although 30 years old, they have not been eclipsed by a better battery technology even now, which makes you realise what a remarkable discovery they are,” he said.

On Monday, William Kaelin, Sir Peter Ratcliffe and Gregg Semenza won the 2019 Nobel prize in physiology or medicine for their work on understanding how cells adapt to low levels of oxygen, and on Tuesday the physics prize was shared between James Peebles, Michel Mayor and Didier Queloz for their work on cosmology and the discovery of the first exoplanet.