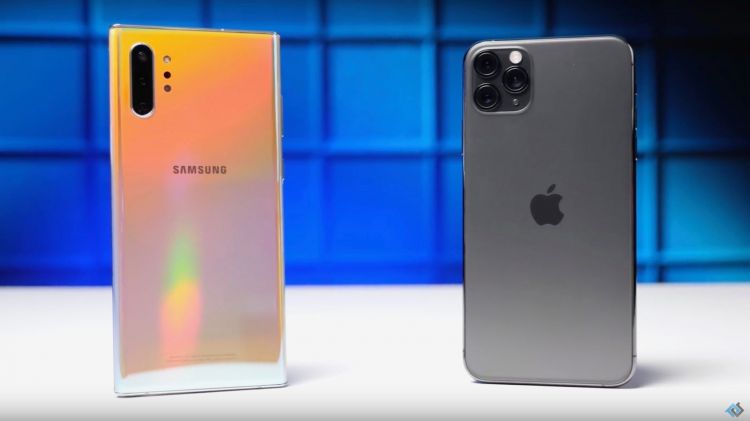 Samsung’s Galaxy Note 10+ is the largest and most luxurious version to date, packing in a gorgeous 6.8in display, plenty of power, and that S Pen stylus of course. Meanwhile, Apple’s new iPhone 11 Pro Max updates the XS Max with more power, more polish, and the best camera setup ever seen on an iPhone.

Which is more worth your thousand-or-more quid right about now? Here’s what we think, now that we’ve reviewed both handsets.

The Galaxy Note 10+ is definitely a stunner, evolving Samsung’s Galaxy S10 design by putting the single display punch-hole at the top-center of the screen, trimming down the bezel even further, and putting a flashy Aura Glow backing glass option in the rotation.

Meanwhile, the iPhone 11 Pro Max is more or less the same as the iPhone XS Max before it, with the same kind of overall size and screen notch - but the frosted glass on the back is a nice new touch. The Note 10+ is the more eye-catching handset, but there’s a definite allure to the minimal simplicity of the iPhone.

On paper, the Galaxy Note 10+ seems to take this particular category. That enormous 6.8in Dynamic AMOLED display arrives at Quad HD resolution (3040x1440) - or 498 pixels per inch (ppi) - and has brilliant contrast and brightness.

The iPhone 11 Pro Max’s 6.5in display is a little bit lower resolution at 2688x1242, but the ppi count of 458 is still extremely close. It’s also a fabulous-looking panel with impeccable brightness and fantastic contrast. These are two of the absolute best screens you’ll find on any smartphone today, and you can’t go wrong either way.

Both are super-versatile setups that take brilliant shots in nearly all scenarios. They’re among the best out there, although Apple’s low-light shots from the auto-engaged night mode definitely have an advantage.

Samsung’s 4,300mAh battery pack is pretty enormous here, but Apple’s 3,969mAh pack is nearly as large - and the largest Apple has ever produced. Both phones are built to give you a very strong day of usage, and withstand solid games and media usage. Both phones are also have wireless charging onboard, although Samsung’s also has PowerShare “reverse” wireless charging tech to top up another wirelessly-chargeable phone or accessory on the back. You can even charge the iPhone on the back of the Note 10+... if you needed to.

In terms of storage, Samsung has the clear advantage. Apple ships the base 11 Pro Max with a paltry 64GB, which is… not enough for most people. You can pay more for 256GB or 512GB, but it’s not cheap. Meanwhile, the Note 10+ starts at 256GB and also comes in a 512GB version, plus you can add cheap microSD storage to expand the tally at any time.

And don’t forget: the Note 10+ has the pop-out S Pen stylus, which you can use to scribble down notes, transform handwriting to text, snap photos and control media from afar, and more. It’s handy, albeit very niche in 2019.

Samsung undoubtedly has the edge on perks, plus it has the edge on price: £999 isn’t cheap, but it’s cheaper than the £1,149 starting price of the iPhone 11 Pro Max. It’s pretty easy to make the argument that the Note 10+ is the better value overall, although if you’re eager to save some cash, we’d point you towards the OnePlus 7 Pro or Samsung’s own Galaxy S10+ instead.

But if you don’t mind spending large for the best of the best, then the iPhone 11 Pro Max is our pick in this showdown. It has small advantages in terms of camera skills and processing power, and is about even in terms of design and display - but the overall experience, paired with iOS 13 and its fantastic app ecosystem, is hard to beat.

The Note 10+ is a great handset, but if you don’t require a stylus, then you don’t need this phone. There are other Androids we’d recommend over it (like the Huawei P30 Pro), but this particular Apple vs. Samsung showdown goes towards Apple in our eyes.