How to use mobile astronomy apps to view the Mercury Transit of 2019 | Eurasia Diary - ednews.net

Prof. NS. Shenocak - cruelty of some EU states is against the Charter of Human Rights and should be condemned
Read: 826 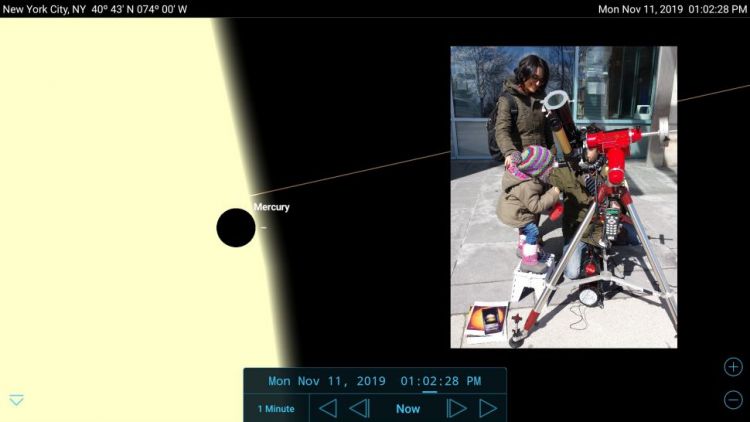 Mobile astronomy apps such as SkySafari 6 are an ideal tool to preview celestial events. The transit of Mercury on the morning of Nov. 11, 2019 is the last such event until 20??. In the Eastern USA and Canada, the moon will set mid-eclipse. But skywatchers in the west will be able to watch the entire eclipse, as shown here near the end of the eclipse at 6:15 a.m. PST in San Francisco, CA. By telling you where in the sky it will occur, your astronomy app can help you plan to observe or photograph any eclipse.

On Nov. 11, 2019, the world will witness a rare transit of Mercury across the disk of the sun. You'll need a telescope equipped with a proper solar filter to view the five-hour event — but whether you can see it at all depends on where you live.

In this edition of Mobile Astronomy, we'll highlight the 2019 transit of Mercury and tell you how to use your favorite astronomy app to preview it and follow the progress of speedy Mercury across the disk of the sun. We'll also show you how to virtually view past and future transits, and even fly to Mars and Jupiter and watch Earth transit the sun!

Mercury orbits the sun every 88 days. From our vantage point here on Earth, the speedy planet passes the sun twice in every orbit — once when it's between us and the sun, and once when it's on the far side of the sun. These events are called solar conjunctions, and all planets experience them. But only Venus and Mercury can produce solar inferior conjunctions — when they pass between us and the sun.
Mercury's orbit is tilted by 7 degrees with respect to Earth's orbit — which we draw on the sky as the ecliptic. The two points in space where Mercury's orbit crosses the ecliptic are called nodes. Most of the time, when Mercury passes the sun at inferior conjunction, it misses the sun by several degrees. But if the sun is near either of the two nodes, Mercury can cross, or transit the disk of the sun — as seen from our vantage point on earth.
Solar eclipses by the moon work by the same principle; as a matter of fact, a Mercury transit is actually a partial solar eclipse, since it hides a tiny bit of the sun. But while the moon's disk is large enough to cover the sun quite frequently, the tiny disks of Mercury (and Venus) require a much more precise alignment — and so the transits are rare.
Transits of Mercury always occur in early May or mid-November, and are more common than transits by Venus. There are typically about 13 or 14 Mercury transits per century. The last transit was on May 9, 2019. The next one after Monday will occur on Nov. 13, 2032 — so it's worth trying to see this one!
Transits of planets have stages. First contact is defined as the moment that the edge of the planet first touches the edge of the sun. Second contact occurs when the planet is first completely within the sun's disk — usually about 90 seconds after first contact. This is a terrific time to watch the transit through a safely filtered telescope.
If the geometry of the encounter has Mercury crossing near the center of the sun, the transit time will be five or six hours. It will be extremely short if the planet crosses close to the northern or southern pole of the sun — and of intermediate duration between those two extreme cases.
The final stages of the transit are third contact, when the planet is about to move off the opposite side of the sun's disk, and fourth, or last, contact — the last moment when the planet's edge is touching the sun's edge. This stage, too, is very brief and exciting to view close-up.
Let's review the details of Monday's transit and show you how to preview it on your favorite astronomy app — or to follow along if you don't own a solar-filtered telescope, or live where it's visible.