Astronomers discovered the ringed planet has 20 more planets, bringing its total to 82 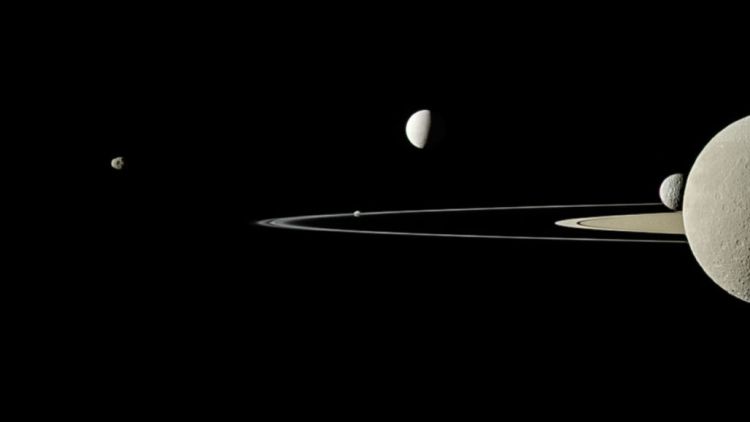 Saturn now reigns as the solar system’s “moon king.” Astronomers have added 20 more moons to its total. That brings the tally for this ringed planet to 82. And that knocks Jupiter — with 79 moons — off the throne. The Minor Planet Center, part of the International Astronomical Union, announced Saturn’s new “moon king” status on October 7.
This is not just a phase. Saturn is likely to keep its title, says Scott Sheppard. He is an astronomer at the Carnegie Institution for Science in Washington, D.C. He estimates that Saturn has about 100 moons. But some are quite small, under 1 kilometer (less than 0.6 mile) across. So, they’re hard to spot.
As it is, it took Sheppard and his colleagues years to confirm Saturn’s new moons. Astronomers spotted specks in images taken from 2004 to 2007 by the Subaru Telescope in Hawaii. They tracked the objects’ locations over time. Those data revealed that the specks were moons.
Each is between 2 and 5 kilometers (1 to 3 miles) wide. Three orbit in the same direction that Saturn rotates. Astronomers describe that motion as prograde. Seventeen of the newfound moons move opposite to Saturn’s rotation. Astronomers call that retrograde motion. Astronomers think that these groups formed when larger moons broke. They may have become broken when they collided with one another. Or, they may have been struck by a passing comet.
There’s one newfound moon that’s an oddball, though. This prograde moon has a funky tilt to its axis. That’s the imaginary line around which something like a moon or planet spins. The tilt of the moon’s axis suggests that it belongs with other similar moons that make an orbit of Saturn  roughly once every two years. But this moon is farther out among the retrogrades. It takes three years to circle Saturn.
Something may have pulled this moon away from its cluster, Sheppard says. Or it could belong to a fourth group. That group might have been created by some unknown event in Saturn’s formative years. Finding more moons may help solve that puzzle. But, Sheppard says, “if we want to find the smaller ones, we have to get bigger telescopes.”