Apophis meteor will gently pass by Earth tonight - experts warn it could collide with our planet in future
Read: 6823 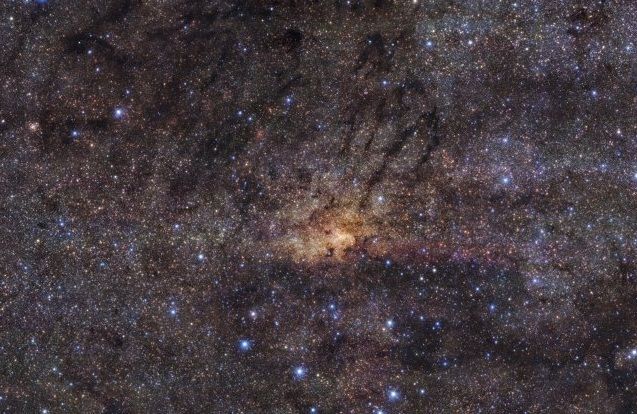 The heart of the Milky Way is a pretty quiet place, with a not-so active black hole, and few star births. But that wasn't always the case. Around 1 billion years ago, the joint was rockin' with a furious round of starburst activity, new observations have revealed, Eurasia Diary reports citing Science Alert.

It was, astronomers say, one of the most boisterous parties the Milky Way has ever put on, and it could contradict our previous ideas about the star formation rate in our home galaxy.

The galactic centre is a star-dense region measuring around 150 parsecs across (490 light-years) in the middle of the Milky Way, around a supermassive black hole (you may have heard of it, it's called Sagittarius A*).

We know that this region has seen some star formation in the last few tens of millions of years. Based on the star density, astronomers have inferred it's been rather busy making stars, and previous research found that star formation has been pretty continuous over much of the galaxy's 13.5-billion-year history.

Now, high-resolution observations have been taken using the European Southern Observatory's Very Large Telescope (VLT) for what astronomers call an "unprecedented" survey of the galactic centre.

This effort was specifically designed to reveal our galactic heart's star formation history, and the survey results are telling a very different story.

"Contrary to what had been accepted up to now, we found that the formation of stars has not been continuous," said astronomer Francisco Nogueras-Lara of the Max Planck Institute for Astronomy in Germany.

According to the team's analysis of the data, most of the stars in the galactic centre - around 90 percent - were formed during the first half of the galaxy's history, between 8 and 13.5 billion years ago.

Then, there was just… 6 billion years of not much at all. Maybe the odd star here or there blopping into existence, but by and large, the lights were off and no one was home.

Until about 1 billion years ago, when suddenly everything roared back up, kicking stars into formation at a furious rate. In the space of less than 100 million years, stars with a combined mass of up to 42 million times the mass of the Sun were born.

"The conditions in the studied region during this burst of activity must have resembled those in starburst galaxies, which form stars at rates of more than 100 solar masses per year," said Nogueras-Lara, who undertook the research while at the Institute of Astrophysics of Andalusia in Spain.

Currently, the Milky Way's star formation rate is slow, around one to two solar masses per year. During a starburst event, different stars are produced - extremely massive, burning very hot and bright. These stars have short, brilliant lives, only up to about 10 million years, before they expire in massive supernovae.

This is what the researchers think happened in the centre of the Milky Way roughly 1 billion years ago.

"This burst of activity, which must have resulted in the explosion of more than a hundred thousand supernovae, was probably one of the most energetic events in the whole history of the Milky Way," Nogueras-Lara said.

This is the first release from the GALACTICNUCLEUS survey. Follow-up observations, the researchers said, can help further constrain and detail the individual events that contributed to this extraordinary time in the galaxy's history.

The research has been published in Nature Astronomy.