Scientists confirmed the existence of an Earth around the nearest star | Eurasia Diary - ednews.net

What does withdrawal of US troops from Iraq mean? - American military expert explains
Read: 676

US, Russia finalize planning for space security exchange at end of July
Read: 594

China responds to US sanctions over Xinjiang
Read: 452

Scientists confirmed the existence of an Earth around the nearest star 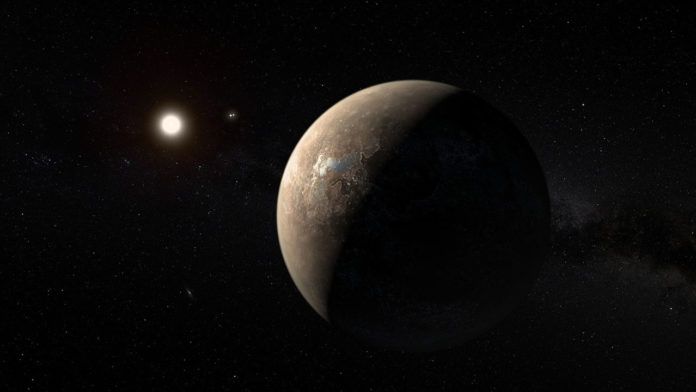 In recent years, the discovery of Proxima b marked one of the most critical milestones in exoplanetary science. Yet the limited precision of the available radial velocity data and the difficulty in modeling the stellar activity calls for a confirmation of the Earth-mass planet, EDNews.net reports citing Tech Explorist.

In a new study, using independent measurements obtained with the new ESPRESSO spectrograph, an international team of scientists, including researchers from the University of Geneva (UNIGE), has confirmed the presence of Proxima b. They also refined the planetary parameters taking advantage of its improved precision.

Through this study, scientists reveal that the planet in question, Proxima b, has a mass of 1.17 earth masses and is located in the habitable zone of its star, which it orbits in 11.2 days.

The ESPRESSO spectrograph has performed radial velocity measurements on the star Proxima Centauri with the precision of 30 centimeters a second (cm/s) or about three times more precise than that obtained with HARPS, the same type of instrument but from the previous generation.

Francesco Pepe, a professor in the Astronomy Department in UNIGE’s Faculty of Science and the man in charge of ESPRESSO, said, “We were already delighted with the performance of HARPS, which has been responsible for discovering hundreds of exoplanets over the last 17 years. We’re pleased that ESPRESSO can produce even better measurements, and it’s gratifying and just reward for the teamwork lasting nearly ten years.”

Michel Mayor, a winner of the Nobel Prize for Physics in 2019, honorary professor in the Faculty of Science and the ‘architect’ of all ESPRESSO-type instruments, said, “ESPRESSO has made it possible to measure the mass of the planet with a precision of over one-tenth of the mass of Earth. It’s completely unheard of.”

It’s been said that Proxima b is an ideal candidate for biomarker research. However, there is a long way to go before we can suggest that life has been able to develop on its surface.

Christophe Lovis, a researcher in UNIGE’s Astronomy Department and responsible for ESPRESSO’s scientific performance and data processing, asked, “Is there an atmosphere that protects the planet from these deadly rays?”

He further added, “And if this atmosphere exists, does it contain the chemical elements that promote the development of life (oxygen, for example)? How long have these favorable conditions existed? We’re going to tackle all these questions, especially with the help of future instruments like the RISTRETTO spectrometer, which we’re going to build specially to detect the light emitted by Proxima b, and HIRES, which will be installed on the future ELT 39 m giant telescopes that the European Southern Observatory (ESO) is building in Chile.”

Meanwhile, the accuracy of the estimations made by ESPRESSO could bring about another surprise. The group has discovered proof of a second sign in the data, without having the option to develop the definitive reason behind it.

Professor Pepe said, “If the signal were planetary in origin, this potential other planet accompanying Proxima b would have a mass less than one-third of the mass of the Earth. It would then be the smallest planet ever measured using the radial velocity method.”