Scientists can't agree on why these hills in the Russian Arctic ripple with stripes.

Near the Markha River in Arctic Siberia, the earth ripples in ways that scientists don't fully understand. 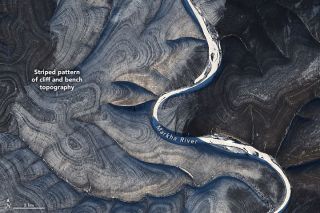 Earlier this week, NASA researchers posted a series of satellite images of the peculiar wrinkled landscape to the agency's Earth Observatory website. Taken with the Landsat 8 satellite over several years, the photos show the land on both sides of the Markha River rippling with alternating dark and light stripes. The puzzling effect is visible in all four seasons, but it is most pronounced in winter, when white snow makes the contrasting pattern even more stark.
Why is this particular section of Siberia so stripy? Scientists aren't totally sure, and several experts offered NASA conflicting explanations.
One possible explanation is written in the icy ground. This region of the Central Siberian Plateau spends about 90% of the year covered in permafrost, according to NASA, though it occasionally thaws for brief intervals. Patches of land that continuously freeze, thaw and freeze again have been known to take on strange circular or stripy designs called patterned ground, scientists reported in a study published in January 2003 in the journal Science. The effect occurs when soils and stones naturally sort themselves during the freeze-thaw cycle.
However, other examples of patterned ground — such as the stone circles of Svalbard, Norway — tend to be much smaller in scale than the stripes seen in Siberia.
Another possible explanation is erosion. Thomas Crafford, a geologist with the U.S. Geological Survey, told NASA that the stripes resemble a pattern in sedimentary rocks known as layer cake geology.
These patterns occur when snowmelt or rain trickles downhill, chipping and flushing pieces of sedimentary rock into piles. The process can reveal slabs of sediment that look like slices of a layer cake, Crafford said, with the darker stripes representing steeper areas and the lighter stripes signifying flatter areas.
In accordance with the image above, this sort of sedimentary layering would stand out more in winter, when white snow rests on the flatter areas, making them appear even lighter. The pattern fades as it approaches the river, where sediment gathers into more uniform piles along the banks after millions of years of erosion, Crafford added.
This explanation seems to fit well, according to NASA. But until the region can be studied up close, it'll remain another one of those quintessentially Siberian curiosities.