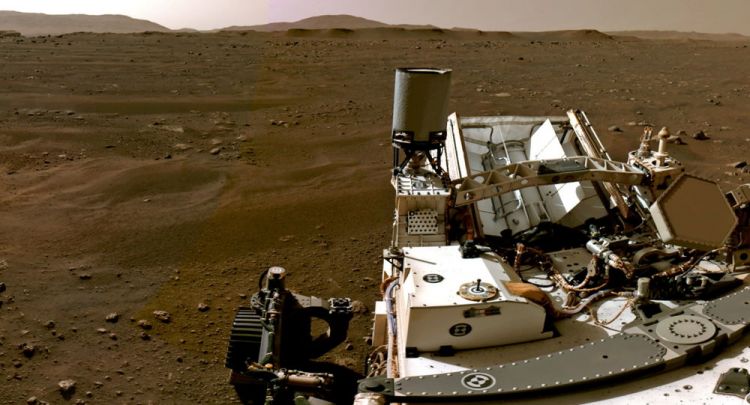 The atmosphere on the red planet is very dry and is about 95 percent toxic carbon dioxide. Some four percent is nitrogen and argon while just one percent is oxygen and water vapor. Although chemical and physical indicators differ significantly from Earth, some natural phenomena appear to be possible on both worlds.
NASA’s new rover, Perseverance, after landing on Mars on 18 February has delivered fascinating pictures of a Martian rainbow, according to a Tuesday statement by the space agency.
It was believed by scientists that a rainbow was impossible in the red planet’s dry and inconsistent atmosphere, as this optic rarity requires myriads of tiny water droplets to refract rays of sunlight.

Many have asked: Is that a rainbow on Mars? No. Rainbows aren't possible here. Rainbows are created by light reflected off of round water droplets, but there isn't enough water here to condense, and it’s too cold for liquid water in the atmosphere. This arc is a lens flare. pic.twitter.com/mIoSSuilJW

The colorful specter could have been caused by a speck of dust reflecting sunlight inside the camera’s optics, analogous with a “lens flare”, according to Dave Lavery, program executive for Solar System Exploration at NASA, cited by Forbes.
"The rover is almost due north of the helicopter, so the camera is looking almost straight south at about 2:00 p.m. local Mars solar time when these images were taken," which are ideal conditions for stray light to interfere with a camera lens, he said.
However, some experts say that a rainbow could be also caused by “icebows” as snow has been observed on the polar regions of Mars.
On 19 February, NASA's Perseverance rover landed on Mars near the Jezero crater seeking traces of life in Mars’ distant past. The machine has already sent photos and video, along with several audio recordings of wind and land sounds.