The US Navy set off explosives next to its new aircraft carrier to see if the ship can handle the shock
Read: 272

Student held for threatening to kill classmates, bomb school campus in US
Read: 177 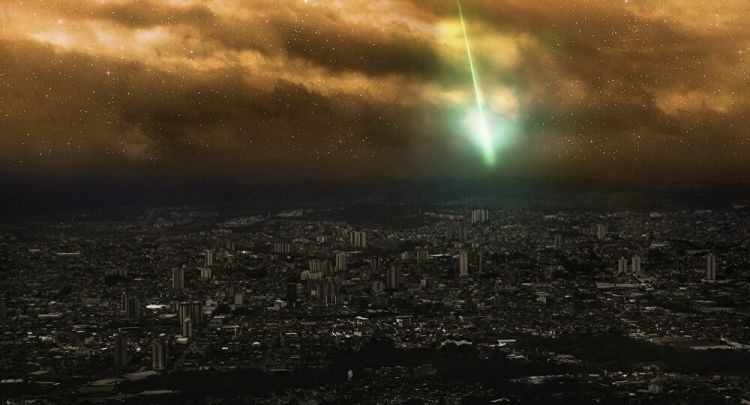 The asteroid 2018 LA was found to have at some point detached from the giant Vesta, a celestial body that can sometimes be distinctly seen from ground-based telescopes on Earth.
Scientists have succeeded in tracing the origin of asteroid 2018 LA, which crashed into Earth in the sprawling Kalahari Desert of southern Africa in June 2018, at least 22 million years back to the time and place of its likely creation.
Early observations, as well as analysis of recovered meteorite fragments have led the research team to map the starting point of 2018 LA as Vesta – the Solar System’s second largest asteroid and the only one that is at times capable of being seen from Earth by the naked eye.
Astronomer Hadrien Devillepoix, from Curtin University in Perth, Australia, said the analysis of the meteorite suggests that it had been deeply buried under Vesta’s surface “before being ejected all those years ago”.
This is “complementary to sample-return probes like Hayabusa2”, he went on, outlining how the research allowed them to arrive at the build-up of the asteroid belt, so that the scientists could better understand the consistency of Earth-threatening asteroids.
"The oldest known materials found in both Vesta and in the meteorite are zircon grains that date back to more than 4.5 billion years ago, during the early phase of the Solar System," says astronomer Christopher Onken, from the Australian National University (ANU).
At the centre of the observations are the images of the chunk while in space picked up by the Australia-based ANU SkyMapper telescope, coupled with data from other telescopes and CCTV footage from the impact site in Botswana.
The fragments were subsequently studied with methods including spectroscopy and microtomography. The latter showed the fragments incidentally matched up with those from the 2015 Sariçiçek meteorite, which is also believed to have been chipped off of Vesta.
"Billions of years ago, two giant impacts on Vesta created a family of larger, more dangerous asteroids. The newly recovered meteorites gave us a clue on when those impacts might have happened," one of the team, SETI Institute astronomer Peter Jenniskens, commented on another aspect of research.
The 2015 object and the 2018 chunk were both found to be so-called Howardite Eucrite Diogenite (HED) meteorites, with the name pointing to their chemical and mineral composition. The diverse methods used in the research enabled the scientists to map the objects' origins to the Veneneia basin on Vesta where these asteroids first came loose.
The 2018 asteroid, nicknamed “Motopi Pan”, after a local watering hole, 1.5-meter (4.9-foot) in diameter and weighing 5,700 kilograms (12,566 pounds), would have burst around 27 kilometers (16.8 miles) above the Earth's surface, researchers have come to believe, glowing 20,000 times brighter than the full Moon as it entered Earth's atmosphere at a speed of around 60,000 kilometers per hour, equal to 37,282 mph.
The observations have made it possible to chart in its entirety for the first time a meteorite’s trip to Earth, and it’s only the second time that an asteroid has been observed in open space before it entered our planet's atmospheric layers. The first such case was in 2008, when the impact of asteroid 2008 TC3 was predicted before its dive as a meteor into Earth’s atmosphere.