How Mirrors Could Power the Planet... and Prevent Wars | Eurasia Diary - ednews.net

How Mirrors Could Power the Planet... and Prevent Wars

Concentrated solar power might just revolutionize the energy sector as we know it. 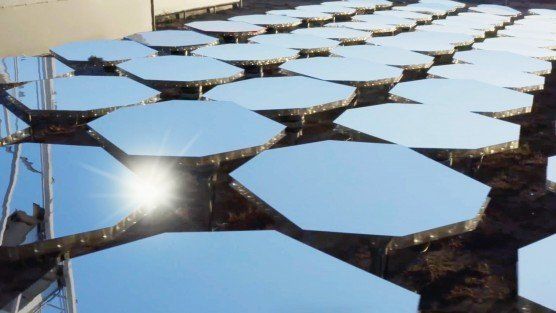 When most people think of solar power, they picture rows and rows of photovoltaic solar panels on the roof of a building. But photovoltaic power is terribly inefficient — the mining and refining of the elements required for daily human life are incredibly costly to the environment.
Fortunately, there are much greener ways to harness sunlight for electricity, and concentrated solar power is one of them. Concentrated solar power is produced using a large amount of revolving mirrors called heliostats which are placed in a relatively flat area that receives a great deal of sunlight.
The mirrors are angled to reflect the sunlight onto a large solar receiver. Aside from being clean energy, one of the most promising advantages of concentrated solar power is that it can generate energy for use far beyond where it was harvested.
The idea of concentrated solar power isn't particularly new — the first commercial plant was developed in the 1960s. But in the past, it wasn't cheap enough to implement on a massive scale. Thanks to advancements in technology, that could be changing soon.
How Concentrated Solar Power Could Fuel the World
If this energy source has so much potential, why isn't it more mainstream? The answer lies in the simple fact that fossil fuels are still cheaper. For now, at least. A growing company backed by Bill Gates is attempting to produce concentrated solar power at scale, to the point that it's more cost-effective than fossil fuels. If successful, it could revolutionize the energy sector as we know it.
Founded by serial entrepreneur Bill Gross, Heliogen is seeking to completely replace fossil fuels with solar thermal energy. What makes the company unique? It's making the process of reflecting and storing sunlight more predictable, controllable, and streamlined. Previously, CSP companies were able to generate heat anywhere from 400 to 500 degrees centigrade. Heliogen has more than doubled that output.
They've created a solar thermal system that's capable of producing temperatures up to 1,500 degrees centigrade. The Heliogen team found a way to use machine learning to get the angle of the mirrors as precise as possible, down to a twentieth of a degree.
In short, Heliogen uses cameras to monitor the mirrors in the field, particularly, how the color of the sky appears in the mirrors. Based on the appearance of the sky, Heliogen's AI decides how to best position the mirrors to get the maximum amount of sunlight reflected.
Once the mirrors are in the optimal position for reflecting sunlight, all of the collected heat gets funneled down an insulated steel tube to a bed of rocks. The rocks can store and retain heat as thermal energy well after the sun sets. Heliogen uses that energy like batteries to power industrial processes, or to split water and create hydrogen, which can be refined into a carbon-free fuel.
Heliogen has an award-winning test facility in Lancaster, California with 400 heliostat mirrors, but eventually plans to build a system with 40,000 mirrors. "To power the earth, we need to cover hundreds of square miles," Gross explains. "But covering hundreds of square miles needs to be done cost effectively."
The construction of this giant sunlight refinery will be highly automated, with robotic tractors to place the heliostat foundations and set the mirrors efficiently. "Beating the price of fossil fuels is the only thing that matters," says Gross. "If we can be even a fraction of a cent cheaper than fossil fuels, the world will adopt this at scale."
If adopted globally, concentrated solar power could make major waves in the manufacturing industry, not to mention prevent wars over oil and mitigate climate change. If we can eliminate our reliance on fossil fuels, humanity's carbon footprint would be drastically smaller.
Gross' dream is to have thousands of sunlight refineries across the southwest United States, Australia, and the Middle East-North Africa region by the end of the decade. If he can pull it off, the way we consume energy would be changed forever.