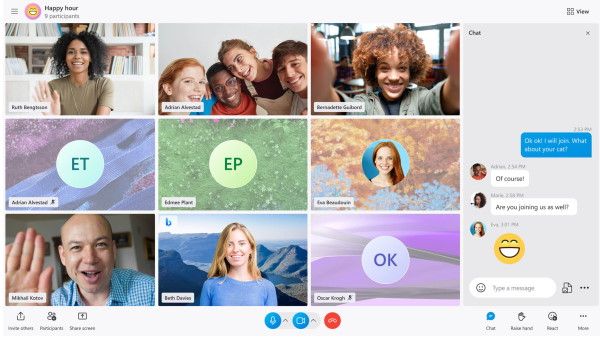 In a world of Zoom, Google Meet, Slack, Microsoft Teams et al, Skype has somewhat fallen out of favor. But this does not mean that Microsoft has given up on this particular messaging tool, and the company is keen to let users know that they have not been forgotten.
Promising that it will be "fast, playful, delightful and buttery smooth​", Microsoft has revealed some of what it has in store for Skype. In addition to a makeover, in the pipeline is a raft of new features including call recordings, animated backgrounds and support for multiple cameras across multiple devices with TwinCam.
The redesign of the app is the most obvious change that is coming to Skype, including a completely revamped call stage. Part of the redesign sees the layout more closely resembling that found in Teams, with the idea being that visibility of participants is improved through the inclusion of larger video feed windows.
Microsoft is also making it possible to hide participants that are taking part in a call using audio only, as well as giving you the option of disabling video feeds if bandwidth issues necessitate this.
On the subject of being able to use more than one camera at once, Microsoft says:
Have you ever wanted to show off your pet to a friend while on a video call on your computer, but you couldn't get your dog to sit still or your camera to move quickly enough to show them? We've made it way easier and more fun to do that with a new feature we call "TwinCam".
Now if you want to show off your pet's sleeping habits or need to tutor someone while showing multiple angles, it's as easy as grabbing your mobile phone or whatever device you have handy and scanning a QR code to add it to the call as another camera! We match you with your video stream and you can impress everyone on the call.​​
Other new features to look forward to include the Skype Universal Translator which offers real-time translations of conversations. There are also improvements to message reactions, custom notification sounds, and the promise that "all browsers" will be supported.