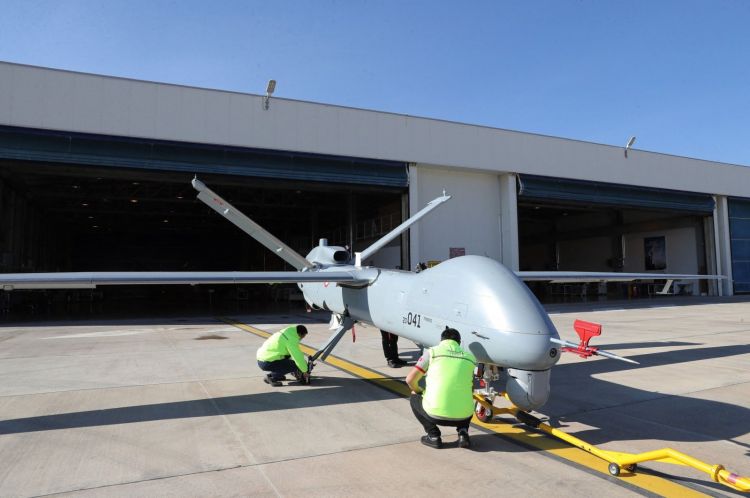 Turkey’s Anka medium-altitude, long-endurance (MALE) unmanned combat aerial vehicle (UCAV)-type combat drones will be built in the new Ukrainian-Turkish plant being established in the ex-Soviet country, according to several news sites.
Russia-based Izvestia newspaper reported the news, citing remarks made on Dec. 11 by Alexei Arestovich, an external adviser of the Ukrainian president's office.
He was cited as saying that the combat drones will be effective against air targets, including other drones and even manned aircraft.
The drones will be equipped with Ukrainian engines and Turkish avionics, Arestovich was said to have told Ukraine’s Radio Svoboda.
Commenting on the main features of the Anka, Arestovich noted that it is a new generation of drones.
The first batch of UCAVs are expected to be produced by the plant by the end of next year, Arestovich added.
The Anka was manufactured by the Turkish Aerospace Industries (TAI). The UCAV first entered the Turkish military's inventory in 2016 following the successful testing of its prototype in 2013.
The drone, which is manufactured locally, is currently in active use by the Turkish Armed Forces (TSK), the Gendarmerie General Command and the National Intelligence Organization (MIT).
On Dec. 6, Ukrainian President Volodymyr Zelenskyy announced that the construction of a plant for the production of modern military drones had begun.
Earlier, on Nov. 12, Ukrainian Defense Minister Oleksii Reznikov said that his country would purchase a new batch of Bayraktar TB2 combat drones from Turkey which are already in the inventory of the Ukrainian armed forces and have been combat-tested.
On Sept. 29, the Bayraktar TB2 UCAV’s manufacturer, Baykar signed an agreement for the construction of the plant in the Kyiv region, where personnel will be trained and the Turkish drones will be maintained and tested. The memorandum was a step toward joint Ukrainian-Turkish production of the drones, according to earlier statements by Zelenskyy’s office.