The 153rd anniversary of Mahatma Gandhi's birthday was celebrated in Baku - PHOTOS
Read: 141 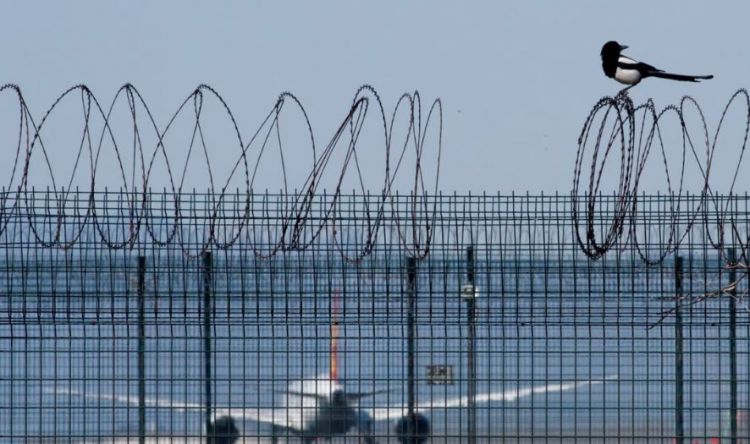 Chinese scientists say they have built a robotic system with lasers to repel birds from airports, helping to prevent risky bird-plane collisions.

The AI-driven system automatically identifies flying birds and fires a painful but non-lethal laser beam at them until they leave the restricted air space.

The high-energy laser beam is guided by a smart camera powered by image recognition and tracking algorithms, according to the researchers.

The research was led by Professor Zhao Fan from Xian University of Technology in the northwestern province of Shaanxi. The team published their findings in the peer-reviewed journal Laser & Optoelectronics Progress in April.

Bird strikes are a high risk to planes, with about 20,000 incidents reported globally each year.

Most collisions between birds and planes occur during take-off and landing, with 90 per cent happening above airports and 50 per cent within 30 metres (98 feet) of the ground.

The system developed by Zhao and her colleagues consists of four parts: a camera to detect birds, a video processing module to track the target, a laser emitter and a moving mirror to reflect and aim the beam.

The AI makes decisions on target detection, tracking, aiming and firing, while the video camera captures real-time images of the assigned airspace. Once the AI detects a bird, it guides the laser beam to drive it away.

Zhao started with a kernelised correlation temfilter (KCF) tracking algorithm, an established method for tracking objects. She then applied another algorithm to identify birds and isolate them from surrounding objects in video images, such as buildings and planes.

The second algorithm improved the stability of the KCF algorithm and reduced the chance of losing a target, especially for birds flying at high speed. It also reduced the calculation burden on the system’s computer.

On-site experiments showed that the bird-repelling system could be used accurately on birds flying within a range of 1,000 metres, according to the study.

The new AI algorithm was evaluated under a normal camera and infrared camera, according to the paper.

“Its performance exceeds other algorithms of the same type,” Zhao said.

She said the new algorithm improved the average success rate and accuracy of visible image target tracking by 47.5 per cent and 51.2 per cent, respectively.

However, a civil aviation expert expressed concern about the technology.

“We have to consider its potential risk for pilots. We can’t put it into use unless the system reaches 100 per cent accuracy,” said the Nanjing-based expert who requested not to be named because of the sensitivity of the issue.

Zhou Haixiang, a wild bird conservationist in Liaoning province, said that the type of laser and beam intensity would be key factors affecting the use of the system.

“Many airports are built next to habitats of precious wild birds. The [Dalian] Jinzhouwan Airport in Liaoning, for instance, is next to the habitat of the common crane and great bustard. The [Wuhu] Xuanzhou Airport in Anhui is near the habitat of the white crane. If the laser is strong enough to hurt these protected species, its use will constitute violation of the law,” he said.

“Even without harm, there needs to be a full investigation of bird species around the airport before deployment. According to our research, some species are immune to flashing lights and buzzers, so they may not react to the laser system at all.”

Zhou said most airports in China use nets or sound and light systems to keep birds away, but many wild birds have learned to adapt after finding them harmless.

The birds could adapt to the laser as well, he said.